TEHRAN, August 5 - A series of protest rallies has been held across Pakistan after the Indian government scrapped the special autonomy status for the disputed Himalayan region of Kashmir, which is claimed by both countries. 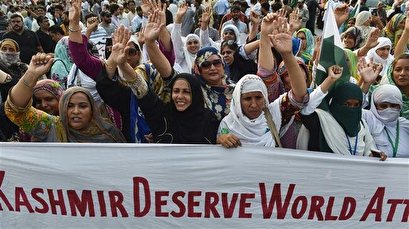 TEHRAN, Young Journalists Club (YJC) - In Muzaffarabad, the capital of Pakistan-administered Kashmir about 45 kilometers from the contested frontier between the neighbors, dozens of protesters held black flags and burnt tires.
They held anti-India placards and chanted slogans against New Delhi rule over the scenic valley.
“The abolition of the special status of Kashmir will not serve its purpose,” media outlets quoted Zahid Iqbal, 35, a migrant from Indian-controlled Kashmir as saying.
“We will fight, and we will fight with more vigor,” he added.
Massive rallies were also held in Islamabad, the capital, the eastern city of Lahore and Pakistan’s southern port city of Karachi.
The Indian Ministry of Home Affairs announced on Monday that India's President Ram Nath Kovind had signed a decree abolishing Article 370 of the constitution that grants a measure of autonomy to Jammu and Kashmir, including the right to draft its own laws.
The president also moved a bill proposing that the Indian-controlled part of Kashmir be divided into two regions directly ruled by New Delhi.
The government in New Delhi lifted a ban on property purchases by people from outside Jammu and Kashmir, opening the way for Indians to invest and settle in the disputed region like any other part of India, a measure likely to provoke a backlash in the territory.
Indian Prime Minister Narendra Modi had earlier pushed for radical political changes in Jammu and Kashmir even before he won a re-election in May. Modi said the old laws had hindered Kashmir's integration with the rest of India.
India earlier also rejected a claim by US President Donald Trump of request for mediation with Pakistan. India has long bristled at any suggestion of third-party involvement in tackling Kashmir.
Moreover, prominent political leaders in the Indian-controlled region of Kashmir were placed under house arrest and the Indian paramilitary forces deployed thousands of extra troops across the region, raising fears of a crackdown.
Pakistan’s Foreign Ministry in a statement said it would “exercise all possible options to counter the illegal steps” taken by India.
Foreign Minister Shah Mahmood Qureshi also said on Twitter that Islamabad would raise the issue with international community.
“We intend to firmly highlight our stance in our meetings with the US delegation visiting Pakistan and with the international community at large,” the top Pakistani diplomat wrote.
According to a statement released after a telephone call with Malaysian Prime Minister Mahathir Mohamad on Monday evening, Pakistani Prime Minister Imran Khan said the move “was in clear violation of the United Nations Security Council (UNSC) resolutions” in the region.
Kashmir has been split between India and Pakistan since partition in 1947. Both countries claim all of Kashmir and have fought three wars over the territory.
India regularly accuses Pakistan of arming and training militants and allowing them across the restive frontier in an attempt to launch attacks. Pakistan strongly rejects the accusation.
Indo-Pakistani Relations nosedived in February when over 40 Indian paramilitaries were killed in a bomb attack in Kashmir. New Delhi blamed Pakistan-based militants. Islamabad denied the claim.
Source: Press TV