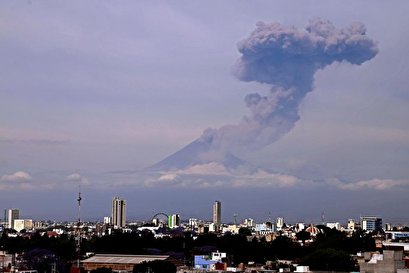 TEHRAN, Young Journalists Club (YJC) -When a large amount of ash is spewed into the atmosphere, the particles reflect the sun's rays back toward space, lowering the temperature on Earth.

In a new paper, published this week in the journal Geophysical Research Letters, scientists considered the possibility of replicating the cooling effects of a volcanic eruption -- a "human-made volcano" to combat climate change.

"Nobody likes the idea of intentionally tinkering with our climate system at global scale," Ken Caldeira, researcher at the Carnegie Institution for Science, said in a news release. "Even if we hope these approaches won't ever have to be used, it is really important that we understand them because someday they might be needed to help alleviate suffering."

Researchers at Carnegie collaborated with scientists in China and India to determine whether solar geoengineering could replicate the cooling effects of a volcanic eruption. Scientists designed a model to compare the effects of a short-term release of particulate matter and the long-term maintenance of an aerosol layer in the atmosphere.

Both strategies yielded depressed land temperatures. When particulates spread throughout the atmosphere and reflect the sun's rays back toward space, the land cools faster than the planet's oceans. However, the short-term ash influx -- the real volcano -- produced a greater temperature difference between land and sea than the long-term geoengineering project.

Though both scenarios yielded depressed precipitation totals, the greater temperature gradient caused by the authentic volcanic eruption resulted in a larger drop-off in precipitation.

"When a volcano goes off, the land cools substantially quicker than the ocean," said Carnegie's Lei Duan. "This disrupts rainfall patterns in ways that you wouldn't expect to happen with a sustained deployment of a geoengineering system."

Authors of the new study concluded that the best way to combat climate change is to reduce global greenhouse gas emissions. However, scientists said it's important to consider geoengineering solutions.