There's a limit to the rainforest's carbon storage abilities

TEHRAN, August 7 -Conserving forests and restoring forest health are vital components of a comprehensive solution to climate change, but new research suggests there are limits to a rain forest's carbon storage abilities. 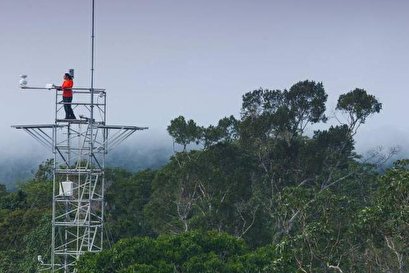 TEHRAN, Young Journalists Club (YJC) -Trees pull carbon from the atmosphere, returning some of it in the form of oxygen, while the rest gets stored as biomass. Most climate models assume the carbon sequestration services of the rainforest are infinitely scalable -- the bigger forest, the more trees, the greater the levels of carbon dioxide absorbed and stored.

New research suggests there is a limit to a forest's ability to take up and store carbon. When scientists surveyed a variety of ecosystem models, they found nutrient reserves serve as an upper limit to growth.

"Most ecosystem models which allow the future development of ecosystems to be simulated were developed for the temperate latitudes, where there is generally sufficient phosphorus," Katrin Fleischer, researcher at the Technical University of Munich, said in a news release. "However, in many areas of the Amazon region, it is in short supply -- the ecosystem is many million years old, and the soil is leached of nutrients."

"This would mean that the rainforest has already reached its limit and would be unable to absorb any more carbon dioxide emissions caused by human kind," said Fleischer. "If this scenario turns out to be true, the Earth's climate would heat up significantly faster than assumed to date."