TEHRAN, August 7 -Roughly a quarter of the planet's human population is affected by extreme water stress, according to a new report by the World Resources Institute. 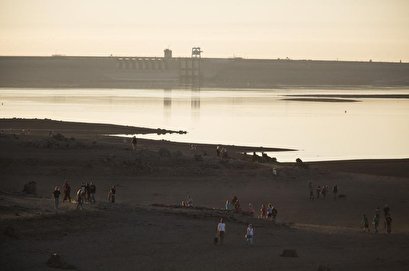 TEHRAN, Young Journalists Club (YJC) -Extreme heat and prolonged droughts -- conditions climate scientists predict will become increasingly common as climate change continues unabated -- have plagued much of planet Earth in 2019. As a result, reservoirs in many parts of the world are worryingly low.

Though droughts are a major problem, the increase in water stress around the world is, according to the latest report, the result of a combination of factors, including taxed water supplies and growing water demands.

Scientists at WRI conducted a global survey of water stress levels, compiling peer reviewed data related to 13 indicators of water risk. Their analysis revealed more than a quarter of the world's population, including population centers in 17 different countries, is affected by extreme water stress.

"Water stress is the biggest crisis no one is talking about," Andrew Steer, president and CEO of the World Resources Institute, said in a news release. "Its consequences are in plain sight in the form of food insecurity, conflict and migration, and financial instability."

As populations in particularly vulnerable parts of the world continue to grow, and as developing economies in Africa and Asia continue to expand, water demands are expected to increase. Meanwhile, climate change is expected to put additional pressures on water resources. As a result, water stress levels are likely to worsen in the decades ahead.

The majority of the countries experiencing extreme water stress, 12 of 17, are located in the Middle East and North Africa.

"The region is hot and dry, so water supply is low to begin with, but growing demands have pushed countries further into extreme stress," scientists wrote in their report. "Climate change is set to complicate matters further."

India, the second most populous country on the planet after China, also faces extreme water stress. Rapid population growth, as well as economic and agricultural expansion, have severely taxed the country's groundwater resources.

Though extreme water stress is certain to remain a challenge for decades, the authors of the latest water stress report suggest there are myriad solutions. Most importantly, agricultural sectors must develop more sustainable water use practices.

"Farmers can use seeds that require less water and improve their irrigation techniques by using precision watering rather than flooding their fields," WRI researchers wrote.

To protect economies and vulnerable populations against the risks of water stress, governments must develop green infrastructure, like conserving wetlands and healthy watersheds and building eco-friendly water filtration systems. According to the report, governments must also develop strategies for treating, reusing and recycling wastewater.

The increased risks of water stress in a warming world isn't exactly a surprise. Scientists and conservationists have been warning world leaders about the problem for years. Though countries in Asia, the Middle East and Africa are most at risk, the United States is also expected to face growing water stress issues.

Unfortunately, most of the planet's groundwater resources are non-renewable. Only six percent of that water will be replenished over the next fifty years. And with dams and reservoirs, as well as logging and expanding agricultural activities, threatening water availability and quality, most countries will face water resource management challenges in the near future.