TEHRAN, August 7 -Foreign Minister Mohammad Javad Zarif says Iran does not view security as a merchantable commodity, but rather derives its security and power from its own people. 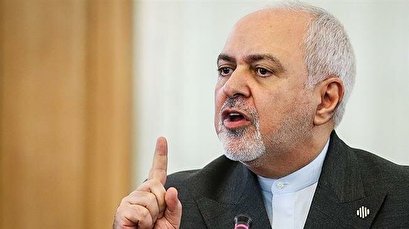 TEHRAN, Young Journalists Club (YJC) -“We never buy security, nor do we sell security because we derive our security, development, and legitimacy from [our] people,” he said at an event marking the Islamic Human Rights and Human Dignity Day in Tehran on Wednesday.

He added that Iran considers its own people, not foreign powers, as the basis for power.

Zarif mentioned the case of Saudi Arabia as an example of a country which maintains a commercial view of security.

Riyadh once trusted the regime of former Iraqi dictator Saddam Hussein with $75 million to use during the bloody war the latter imposed on Iran from 1980 to 1988, Zarif said.

“How come it [Saudi] did not realize that money does not guarantee security. After that (financing the Iraqi war), Saddam used the same weapons [it had bought with the money] against Saudi Arabia itself,” Zarif noted.

This is while even the Israeli regime’s so-called “Iron Dome” missile system has faltered in the face of Palestinian missiles, he added.

'US waging terrorism against Iranians'

“Sanctions equal terrorism. The target of sanctions is [ordinary] people,” he said. “Terrorism means deployment of instruments of force in order to impose intended political agendas.”

He cited his American counterpart Mike Pompeo’s remarks that Washington intends to pressure Iran’s people in the hope that they would bring about “regime change” in their own country.

“If this is not terrorism, what is it then?” he asked.

The US returned its harsh sanctions against Iran last after leaving a multi-lateral nuclear accord on the Iranian nuclear program last year,

Washington’s policy, Zarif stated, is based on the rhetoric of “enforcement, elimination, and territorial expansionism.”

Elsewhere, Zarif said Iran keeps observing the rights of its people as it regards human rights to be a requirement of its security.

The foreign minister then addressed the West’s criticism of Iran’s rights record, saying the West had better drop the discourse “and stay absolutely silent” given its lackluster performance in the aftermath of Saudi journalist Jamal Khashoggi’s state-sponsored murder.

He reaffirmed Tehran’s position that it seeks “constructive interaction.”

Such interaction, though, should be based on Iran’s discourse, he stated, saying, “We cannot lose our discourse. If we do, we would have lost our identity.”