TEHRAN, August 8- Yemen’s port city of Aden — which bases the ex-government — has been rocked by deadly clashes between Emirati-backed separatists and Saudi-backed militants, amid a widening rift in the Riyadh-led military coalition waging war on the Arabian Peninsula state. 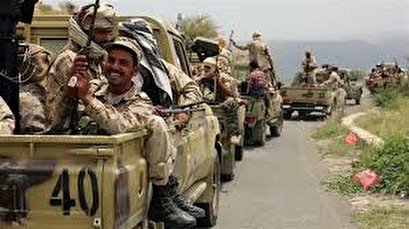 TEHRAN, Young Journalists Club (YJC) -According to reports, the infighting broke out Wednesday after the southern separatists attended a funeral for dozens of fellows, including a senior militant commander, who were killed in last week’s retaliatory missile attack by Yemen’s Houthi Ansarullah movement on a military parade.

Both the UAE-backed separatists and the militants loyal to the former Saudi-allied Yemeni government hserve the Riyadh-led coalition, which has been engaged, since 2015, in a bloody military campaign against Yemen aimed at reinstating ex-president Abd Rabbuh Mansur Hadi, who had resigned in 2014 and later fled to the Saudi capital.

During the funeral, the mourners chanted slogans against the self-proclaimed Hadi administration and exchanged gunfire with the guards at the presidential palace in Aden — where Hadi was supposed to be based but which remains largely empty as the ex-president lives in Riyadh.

The two sides pursue different agendas for Yemen’s future; the separatists want independence from Yemen, while the other militants seek to bring Hadi back to power, but the two camps have joined forces in the Saudi-led battle against Yemen’s Houthi movement, which has been both running state affairs and defending the country against the aggression.

“The people of the south are all on the street. This is a movement by the people that cannot be stopped, except with the government’s downfall,” said mourner Abdelhakim Tabaza.

Presidential guard Brigadier General Sanad al-Rahwa told al-Masdar Online news website that his forces had clashed with armed groups, who were trying to storm the presidential palace and the central bank.

The self-proclaimed interior minister, Ahmed al-Mayssari, also claimed that the loyalists to Hadi had practiced restraint so far, but were “fully ready” to combat any actions targeting the institutions affiliated with the ex-government in Aden.

The UAE’s Minister of State for Foreign Affairs Anwar Gargash urged calm and dialog. “Escalation is not an acceptable option,” he tweeted.

Meanwhile, UN Special Envoy for Yemen Martin Griffiths voiced alarm at “the military escalations” near the presidential palace in Aden.

“Escalations of violence will contribute to instability and suffering in Aden and will deepen Yemen’s political and social divisions," he said.

“I call on the parties involved to abandon violence and engage in dialog to resolve differences. I also urge all those with influence to de-escalate the situation and ensure the protection of civilians,” he added.

Ties between the pro-Hadi side and the UAE-sponsored militants have grown increasingly tense over a number of issues, including what the Yemenis view as Abu Dhabi’s intention to occupy Yemen’s strategic Socotra Island and gain dominance over the major waterways in the region.

The latest clashes erupted weeks after the UAE — a key party to the Saudi-led coalition — announced a surprise plan to withdraw its troops from Yemen in a major blow to its coalition allies.

It is not the first time such clashes break out between rival militants in Aden. In January, the UAE-backed southern Yemeni separatists took control of the two city after days of frighting and confined the Hadi administration to the presidential palace.