US Defense Secretary Esper in Mongolia to up pressure on Russia, China

TEHRAN, August 8- US Defense Secretary Mark Esper has traveled to Mongolia, a Eastern Asian country that plays a key role in America’s policy to counter the growing influence of Russia and China in the Indo-Pacific region. 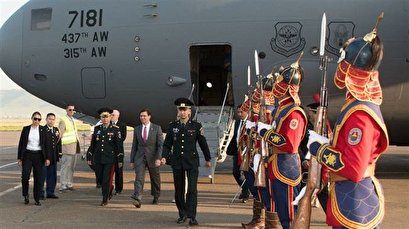 TEHRAN, Young Journalists Club (YJC) -Esper met with senior Mongolian leaders on Thursday after landing in the capital Ulan Bator to begin the rare visit, which is also his maiden foreign trip since taking over on July 23.

"It is my deep privilege to be here, to be with you and to have the opportunity to look at different ways we can further strengthen the ties between our two countries," Esper said before meeting his Mongolian counterpart.

Mongolia is not a frequent destination for Americana defense chiefs. Former Secretary of Defense Chuck Hagel was the last sitting Pentagon chief to visit the country by making a 4-hour stop in Ulan Bator back in 2014.

Washington’s interests in closer ties with Mongolia is in large part due its if situated between Russia and China and therefore best represents the Pentagon's priorities over the coming decades as it shifts focus from the rest of the world to focus on this area instead.

Mongolia, on the other hand, has been looking forward to reduce its economic dependence on China by securing investment deals with the US and other countries it considers "third neighbors."

“Given its location, given its interest in working more with us…all those things are a reason why I want to go there and engage,” Defense Secretary Esper told reporters traveling with him this week.

During a visit to Asia-Pacific earlier this week, Esper repeatedly criticized China for “destabilizing” the Indo-Pacific with what he called military aggression in the South China Sea, theft of intellectual property and “predatory economics.”

“The United States will not stand by idly while any one nation attempts to reshape the region to its favor at the expense of others,” Esper said during a stop this week in Sydney.

A senior US defense official told Reuters that while Esper was not promoting any specific initiative during the trip to Mongolia, the US was keenly considering expanding ties with the country.

Military training, which could take advantage of Mongolia's cold weather, was among the many possible areas of cooperation that American officials had in mind, the official added.

"They have been a good ally that punches above its weight, and I think Secretary Esper wants to acknowledge (that) and see if there are ways to grow the partnership further," said the senior US official, who spoke on the condition of anonymity.

Mongolia has long been a close military partner to the US. It has consistently deployed troops to the US-led missions in Iraq and Afghanistan, where there still around 200 Mongolian troops on the ground.

The trip comes at a particularly tense time in relations between the US and China, which are locked into an escalating trade war.It has also comes to blows with Russia over sanctions and Soviet-era nuclear treaties.

The US military, under Trump, put countering China and Russia at the center of a new national defense strategy, which was released last year and included replacing the decade-long strategy of allegedly fighting terror in the Middle East to confronting China and Russia near their own territories.

The Trump administration is also hopeful that it could use Mongolia’s supposedly close relationship with North Korea to revive stalled denuclearization talks with Pyongyang.

The two countries are connected by rail.

Abraham Denmark, a former US deputy assistant secretary of defense for East Asia, said while Mongolia was not likely to openly take sides against Russia and China, it could still help the US further its agenda.

"They are looking to bolster their relationships with the United States because possibly they want American economic engagement and political engagement, but also because it gives them a bit more breathing space in their relations with Beijing and Moscow," Denmark said.