TEHRAN, August 8- Violent clashes have reportedly erupted between Indian and Pakistani troops along the border in Kashmir, a significant escalation at a time of already high tensions between New Delhi and Islamabad. 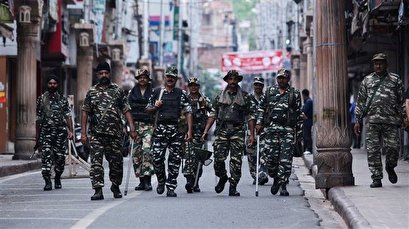 TEHRAN, Young Journalists Club (YJC) -Local media reported on Wednesday that Indian and Pakistani troops had exchanged fire along the volatile Line of Control (LoC) in Jammu and Kashmir.

The Indian military said a ceasefire violation had taken place in the Sunderbani Sector of the LoC, with Pakistani forces firing small arms and mortars, according to local Indian media.

“The Indian army retaliated befittingly,” an Indian military source said, according to reports.

Kashmir is on lockdown in the wake of a decision by New Delhi to scrap the special autonomy status of the region, which is generally considered disputed territory.

Pakistan and India have fought three wars over the region, and the military flare-up on Wednesday risks turning into another full-scale confrontation. The United Nations (UN) has already called on the two sides to maintain peace.

Elsewhere, in the Indian-administered Kashmir, reports said Indian security forces had used teargas and pellet guns to disperse protesters in the streets of various towns, including Srinagar, Pulwama, and Baramulla.

Speaking on condition of anonymity, a police official told AFP that more than 100 people had been arrested and, in one incident, a youth being chased by police had “jumped into the Jhelum River and died.”

The Indian capital was also the scene of rallies by hundreds of people who protested the lockdown on Kashmir.

Calling it the “death of Indian democracy,” protesters in New Delhi on Wednesday called on the government of the Hindu nationalist Bharatiya Janata Party (BJP) to reconsider its decision on Kashmir.

The government of Indian Prime Minister Narendra Modi the special status of Indian-administered Kashmir on Monday.

India has cut internet and telephone services in the area.

Pakistan has described the Indian decision “illegal.” It has also downgraded diplomatic relations and suspended bilateral trade with India. The Pakistani Foreign Ministry earlier announced the expulsion of the Indian envoy from the country.

Pakistan has also said it would partially close its airspace to Indian flights until September 5.

Ahead of its announcement, India deployed tens of thousands of troops to Kashmir and introduced other security measures — including a call to stock up food and fuel — over claims of an imminent terror attack.

The Jammu and Kashmir government also ordered tourists to cut their stay in the region short and leave as soon as possible because of “intelligence inputs of terror threats” against a huge Hindu pilgrimage and “the prevailing security situation.”

Muslim-majority Kashmir has been split between India and Pakistan since it was partitioned in 1947. Both countries claim all of Kashmir.