TEHRAN, August 9 -UAE-backed southern separatists and Saudi-led militia have engaged in fresh fighting in Yemen’s southern port city of Aden amid a growing rift within the Riyadh-led coalition in its war on the impoverished Arab country. 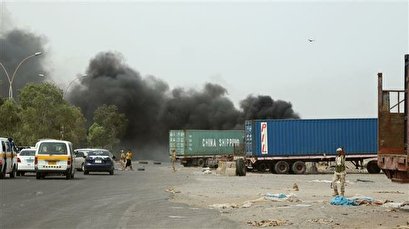 The battles, they added, centered on the all-but empty presidential palace and in a neighborhood, where self-proclaimed interior minister Ahmed al-Mayssari lives.

The minister, however, had left his home during a lull in fighting the previous night, unnamed sources told Reuters.

Saturday's fighting marked a fourth straight day of militant infighting in Aden, a gateway for commercial and aid supplies.

At least eight civilians were killed during Friday's confrontation, according to medical sources.

The Norwegian Refugee Council (NRC), a humanitarian NGO, warned that civilians have been trapped in their homes with dwindling food and water supplies.

"There has been heavy, continuous shelling. We’re still hearing clashes in my neighborhood,” said Amgad, an NRC staff member. “There is no way to get out of the city. Roads are closed and it is not safe. People are scared. We hope this will end soon.”

In a statement, he urged rival parties to cease hostilities and "engage in an inclusive dialogue to resolve their differences and address the legitimate concerns of all Yemenis."

The Aden clashes broke out on Wednesday after southern separatists accused a political party allied to Hadi of complicity in last week’s retaliatory missile attack by Yemen’s Houthi Ansarullah movement on a military parade.

The militant infighting in Aden has exposed splits in the Saudi-led coalition.

Both the UAE-sponsored separatists and the Saudi-backed pro-Hadi militants serve the Riyadh-led coalition, and have been engaged, since 2015, in a bloody military campaign against Yemen aimed at reinstating Hadi.

The former president resigned in 2014 and later fled to the Saudi capital.

Ties between the two sides have soured over a number of issues, including what the Yemenis view as Abu Dhabi’s intention to occupy Yemen’s strategic Socotra Island and gain dominance over the major waterways in the region.

Last month, the UAE announced a surprise plan to withdraw part its troops from Yemen, largely because Abu Dhabi believes the war appears to have become “unwinnable”, according to US reports.