TEHRAN, August 9 -Iranian President Hassan Rouhani has been invited to a high-profile summit of the Eurasian Economic Union (EAEU), a major regional organization which can help Tehran increase its non-oil export revenues amid sanctions imposed by the US. 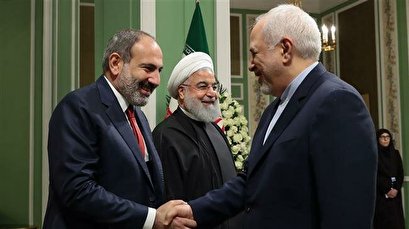 TEHRAN, Young Journalists Club (YJC) -Armenian Prime Minister Nikol Pashinyan said on Saturday that he had invited Rouhani to the EAEU meeting of leaders in Yerevan on October 1, according to a report by the Armenian news agency Mediamax.

“In accordance with the agreement between the leaders of the EAEU member states, I have invited the President of Iran to participate in Supreme Eurasian Economic Council meeting in Yerevan,” said Pashinyan while in Kyrgyzstan to attend an EAEU meeting.

The invitation comes more than a month after Iran ratified a parliamentary bill to launch a free trade zone with EAEU members, namely Russia, Belarus, Kazakhstan, Armenia and Kyrgyzstan.

The legislation came more than a year after Tehran signed an agreement with the regional organization to facilitate bilateral trade.

The agreement is expected to hugely boost Iran’s trade capacity with countries to the north of a region in northern Asia and Eastern Europe called Eurasia.

That comes amid sanctions imposed by the United States which have hampered Iran’s direct sale of oil.

However, accessing the EAEU could cause a massive boom in Iran’s non-oil exports, which includes a high volume of petrochemicals and refined products, to neighboring and nearby countries.

Iran seeks to bring the value of its exports to the group of 15 neighboring and nearby countries to over $32 billion at the end of the current Iranian calendar year in March.

There were no immediate comments from Iran’s presidency or the foreign ministry whether Rouhani would attend the EAEU meeting in Yerevan in early October.