TEHRAN, August 9 -Pakistan has suspended a bus linking Lahore to India’s capital in reaction to New Delhi’s revocation of the autonomy of the disputed Kashmir region. 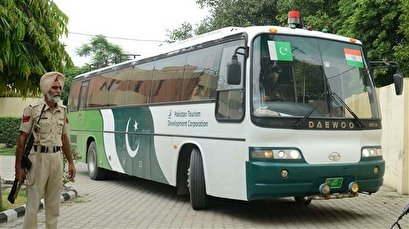 TEHRAN, Young Journalists Club (YJC) -Arshad Ali, tourism officer at Pakistan Tourism Development Corporation that runs the Pakistan leg of the journey, said on Saturday that the government had issued directives that meant the bus, which was the last remaining public transport link between the two countries, was suspended from Saturday onwards.

"The operation will remain suspended till further decision," he said.

Delhi Transport Corporation, that runs the service in the other direction, did not respond to requests for comment.

The Lahore-Delhi friendship bus service was first launched in February 1999 and it has run almost continuously as a symbolic link between the two countries since then.

The government of Indian Prime Minister Narendra Modi revoked the special status of Indian-controlled Kashmir on Monday, in a move described by Pakistan as “illegal.” A curfew was also imposed in the Muslim-majority region and thousands of additional paramilitary troops were deployed.

Pakistan has already cut two rail links. It has also downgraded diplomatic relations and suspended bilateral trade with India, all part of what it called a diplomatic effort to protest against the Indian decision.

Pakistan has also said it would partially close its airspace to Indian flights until September 5.

Kashmir has been split between India and Pakistan since their partition in 1947. Both countries claim all of Kashmir and have fought three wars over the territory.

India regularly accuses Pakistan of arming and training militants and allowing them across the frontier. Pakistan strongly rejects the accusation.

Indo-Pakistani relations nosedived in February when over 40 Indian paramilitaries were killed in a bomb attack in Kashmir. New Delhi blamed Pakistan-based militants. Islamabad denied any involvement.