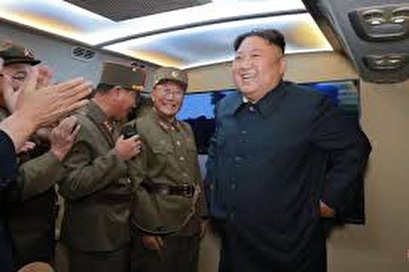 The allies kicked off largely computer-simulated small-scale exercises on Saturday for a 10-day run, as an alternative to previous large-scale annual drills that were halted to expedite nuclear talks between Pyongyang and Washington.

North Korea calls such exercises a "rehearsal for war" and has countered them with its own military action. The new "projectiles" were developed to suit the country's terrain, and the latest test proved their "advantageous and powerful demand of the design was perfectly met," KCNA said.

Missile experts at the James Martin Centre for Nonproliferation Studies in California said photos released by KCNA appear to show a new type of short-range ballistic missile, though detailed analysis is necessary.

In a separate statement carried by KCNA, a senior North Korean diplomat said there will not be inter-Korean talks unless the allies end their military exercises that still maintain "aggressive nature."

"Given that the military exercise clearly puts us as an enemy in its concept," said Kwon Jong Gun, director-general for American affairs at the foreign ministry.

"They should think that an inter-Korean contact itself will be difficult to be made unless they put an end to such a military exercise or before they make a plausible excuse or an explanation in a sincere manner." Kwon said South Korea talked "nonsense" by urging the North to stop missile tests which served its right to self-defense.

"Even the US president made a remark which in effect recognizes the self-defensive rights of a sovereign state, saying that it is a small missile test which a lot of countries do," Kwon said.

Pyongyang has lauded Trump and his personal ties with Kim while chastising South Korea as a "puppet" regime following the orders of its master, the United States.

Keen to tout his North Korea policy ahead of his 2020 re-election bid, Trump has played down the recent series of missile tests, saying they do not violate Kim's pledge to forego nuclear and long-range tests.

Trump wrote on Twitter on Saturday that Kim has sent a letter saying "very nicely" that he was ready to resume negotiations once the "ridiculous and expensive" joint exercises were over.

He said called the offer "a small apology for testing the short range missiles, and that this testing would stop when the exercises end."

Trump and Kim have met twice since their first summit in Singapore last year, but little progress has been made on the North's stated commitment to denuclearize.