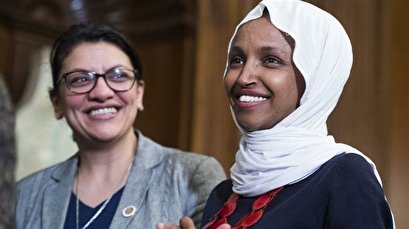 According to the report, the White House, however, has denied offering such advice to the Israeli regime with Press Secretary Stephanie Grisham saying, ”The Israeli government can do what they want. It's fake news."

The Israeli parliament passed a law in 2017, requiring the interior minister to block foreign nationals from entering the occupied territory if they have supported boycotting the Zionist regime.

Trump’s move came days after the US House of Representatives overwhelmingly passed a resolution last week to condemn the Boycott, Divestment and Sanctions, or BDS movement, which Omar and Tlaib support.

The resolution claims that the global movement to boycott Israel over its policies toward Palestinians "promotes principles of collective guilt, mass punishment and group isolation, which are destructive of prospects for progress towards peace."

Both Omar and Tlaib voted against the resolution.

Israeli ambassador to the US Ron Dermer reportedly said last month that the regime would not bar the congresswomen from entering Israel.

"Out of respect for the US Congress and the great alliance between Israel and America, we would not deny entry to any member of Congress into Israel," he said as quoted in a report by Israeli daily Haaretz.

The two Muslim lawmakers are due to arrive in Israeli on August 18, according to the report, which noted that the timing could change.