TEHRAN, August 11 - South Korea has threatened to end a military intelligence sharing agreement with Japan as a squabble over trade escalates. 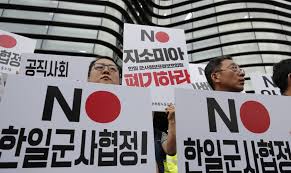 TEHRAN, Young Journalists Club (YJC) - The breakdown in ties comes as North Korea stages a series of missile tests into the waters between the Korean Peninsula and Japan.

The agreement is supposed to be a symbol of the countries' security cooperation with their ally, the United States, and it took years of painstaking work to negotiate.