TEHRAN, August 13 -Measurements of the mass and energy from a jet driven by the protostar has given scientists a look at one of the crucial steps in the formation of stars. 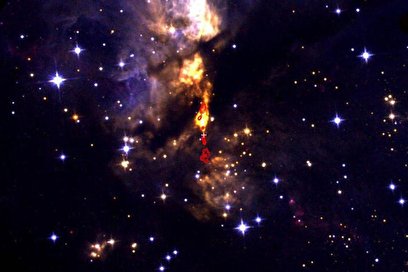 TEHRAN, Young Journalists Club (YJC) -Scientists have precisely measured the mass and energy of a jet driven by a high-mass protostar, a component and process that scientists estimate is a key to part of stellar formation.

Scientists have now directly observed and measured this phenomenon, identifying continuity among low-mass and high-mass protostars. Until now, scientists weren't sure whether the degree of ionization inside outflow jets was similar across the mass spectrum of protostars. The new research suggests the mechanism is consistent across the spectrum.

"We are now one step closer to filling in the gap between low-mass and high-mass star formation, which is very significant," Rubén Fedriani Lopez, a physicist and postdoctoral student at the University College Dublin, said in a news release. "We are on the cutting edge of science in this area, and having access to the best telescopes in the world via Ireland's membership with the European Southern Observatory, and collaborating internationally has helped greatly in getting us there."

Researchers at UCD collaborated with scientists from the Dublin Institute of Advanced Studies for the new study, published this month in the journal Nature Communications. The international team of scientists observed the protostellar jets using the Hubble Space Telescope, the Karl Jansky Very Large Array and the Very Large Telescope at the European Southern Observatory

"After many years of debate, we are finally understanding how massive stars form, namely accreting matter from discs, while at the same time ejecting powerful and highly collimated jets," said study co-author Alessio Caratti o Garatti.