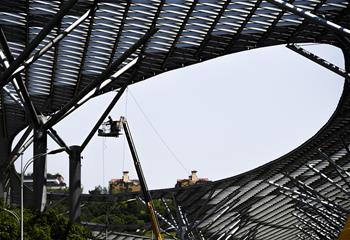 TEHRAN, Young Journalists Club (YJC) - Colonel Saratvuth Chaisith, commander of the 29th infantry regiment based in the western province of Kanchanaburi, told media on Monday that he has instructed his army based in Kanchanaburi to stay vigil as the bridge may collapse under the force of strong currents in the Songkalia River and a huge amount of debris piling up against the bridge's structure.

The Thai Army has been using motor boats, troops and volunteers to remove the debris, mostly tree branches and logs washed out of the jungle and restricting the flow of water under the bridge.

"The pressure of the water will increase and could force the wooden bridge to collapse, as in similar incident on July 28th, 2013 when the midsection of the bridge collapsed," said Colonel Saratvuth.

Heavy rain has been falling in the Tanasserim mountain range area, bordering Myanmar, for more than two weeks, sending runoff from swollen streams into the Songkalia and Runtee rivers, said the colonel, adding that his troops are on standby to help the ethnic Mon people in Ban Sanaefong and Ban Koh Satoeng in Tambon Laiwo, Sangkhla Buri district, which are the localities most vulnerable to flooding.

Located in Sangkhla Buri district of Kanchanaburi province, the Mon Bridge is a famous tourist attraction for both Thais and foreigners.