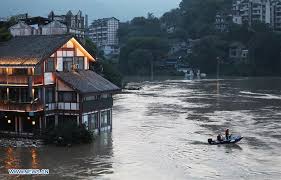 TEHRAN, Young Journalists Club (YJC) - In a statement on Tuesday, Foreign Ministry Spokesman Abbas Mousavi offered sympathy to the governments and nations of India, China, and Myanmar, and to the families of victims of flooding that has caused heavy damages in large parts of Asia.

In China, the death toll from Typhoon Lekima sweeping across its east coast has risen to 30, with several others still missing, after torrential downpours forced over one million to leave their homes.
In India, torrential rains have caused serious flooding in Gujarat, Kerala, Karnataka and Maharashtra, killing at least 200 people. More than 50 Indian people are missing since floods hit Kerala.

And in Myanmar, more than 105,000 people have been displaced because of flooding since June.

Monsoon downpours that set off flooding and a landslide in Myanmar late last week have killed at least 51 people and left dozens more missing in the deadliest natural disaster to strike a part of the nation’s southeast in decades.