TEHRAN, August 14 - Pakistan called on the United Nations Security Council to convene an urgent meeting on India’s decision to revoke autonomy for the disputed Muslim-majority state of Kashmir, a move it says could spark a new conflict between the two South Asian nuclear powers. 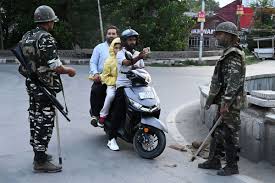 There is a “clear and present danger” that India will provoke a conflict with Pakistan to divert attention from its recent actions, Qureshi said.

Pakistan’s always strained relations with its neighbor are being put to a new test after Indian Prime Minister Narendra Modi ended seven decades of autonomy for the disputed state of Kashmir. Kashmir, in the Himalayas, has been divided between India and Pakistan since independence from British rule, and is claimed by both.

Modi’s move gives India’s central government control of the local police and allows Indians outside Kashmir to buy property there.

Modi said it would usher in a new era of prosperity for Kashmiris.

India has traditionally sought to keep its disputes with Pakistan away from international fora like the UN while Pakistan, asserting that India is violating international law, wants the world body to put the issue on the Security Council’s agenda.