TEHRAN, August 14 - Hundreds of protesters took to the streets of Mexico City calling for justice for two teenage girls who were allegedly raped by police officers. 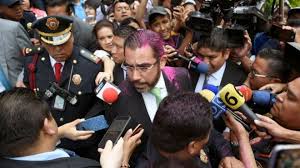 TEHRAN, Young Journalists Club (YJC) - The first case involves a 17-year-old girl who said four policemen raped her in their patrol car in Azcapotzalco, in the Mexican capital’s north, on 3 August.

The saga has sparked outrage after the city lawyer, Ernestina Godoy, last week admitted the officers have yet to have been charged because officials are waiting for the victim to identify the perpetrators.

In the other case, just six days later, a 16-year-old girl said a policeman raped her in a museum in the city centre. A policeman was arrested on Thursday.

Around 300 protesters, who were predominantly women, descended on the city’s security headquarters and the capital’s prosecutor’s office on Monday. They voiced their anger at the two recent cases – shouting “justice” and “they don’t protect us, they rape us” at officers.

The demonstrators, equipped with pink glitter and spray paint, advanced on the prosecutor’s office and smashed its door and left a pig’s head outside.

Mexico’s security minister Jesus Orta Martínez was enveloped in pink glitter when he tried to reassure the women both cases would be properly investigated.

Claudia Sheinbaum, Mexico City’s first elected female mayor, branded the demonstration a “provocation”. At a press conference, she said the authorities would carry out justice but labelled the demonstrators provocateurs.

She said: “We are not going to fall for any provocation, this was a provocation. They wanted the government to use violent methods and in no way will we fall for it. There will be an investigation and the prosecutors’ office will resolve it”.

Sheinbaum said “due to the seriousness of the case“ the Human Rights Commission of Mexico City would be involved in the investigation.

Violence against women is prevalent in Mexico – according to United Nations figures, an average of nine women are believed to be murdered every day.