U.S. and Britain discuss trade deal that could take effect on November 1

TEHRAN, August 14 - Britain and the United States are discussing a partial trade accord that could take effect on Nov. 1, the day after Britain is due to leave the European Union, a senior Trump administration official said on Tuesday. 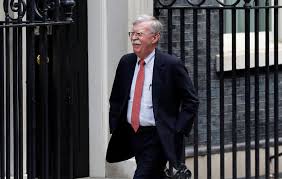 That could take place at this month’s G7 summit meeting in France, the official said.

Bolton and British finance minister Sajid Javid discussed the possibility of a temporary trade agreement that covered all sectors. Such a deal could last for something like six months, the official told reporters.

Britain is due to leave the European Union on Oct. 31 and Prime Minister Boris Johnson has said he is prepared to take the country out of the bloc without a deal although he hopes to secure an orderly departure with an agreement.

The current impasse with the EU leaves Britain facing an exit without any formal transition period or legal agreement covering issues such as trade, data transfers and border policy, prompting some businesses to warn of damage to their operations.

During a two-day visit, Bolton told British Prime Minister Boris Johnson that President Donald Trump wanted to see a successful British exit from the European Union on Oct. 31 and that Washington would be ready to work fast on a U.S.-UK free trade agreement.

Bolton, who has now left Britain, was seeking an improved U.S.-British relationship with Johnson after sometimes tense ties between Trump and Johnson’s predecessor, Theresa May.