TEHRAN, August 14 - Nearly 250 new immigrants from the United States and Canada have arrived in the Israeli-occupied territories and been received by Israeli officials amid the sounds of shofar blasts and the cheering of hundreds of Jewish extremists, as opposed to the Tel Aviv regime’s controversial plan to expel thousands of African refugees. 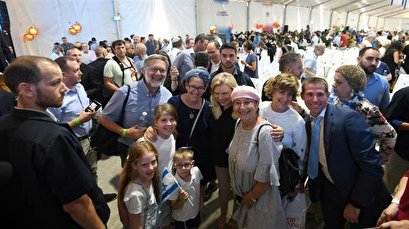 TEHRAN, Young Journalists Club (YJC) -On Wednesday, a total of 242 immigrants landed at Ben Gurion Airport on a special flight chartered by Nefesh B'Nefesh – an organization which promotes and facilitates Aliyah (Jewish immigration to Israel) from the United States, Canada and the United Kingdom, and facilitated in cooperation with Israel’s Aliyah and Integration Ministry, the Jewish Agency for Israel, Keren Kayemeth Le’Israel (KKL), and Jewish National Fund-USA.

The group of immigrants, which included 31 families, hail from Canada and over 20 American states, and plan to settle throughout the Israeli-occupied lands.

Of the people, who decked out in Nefesh B’Nefesh caps and T-shirts, 41 plan to join the Israeli military as lone soldiers, and 103 are under the age of 18.“You, the lone soldiers, I especially welcome. Welcome to Israel and welcome to the Israeli army…  All of Israel embraces you today; we are all your family. Even if you are called ‘lone soldiers’ – you are not alone: We are always with you,” Sara Netanyahu, the wife of the Israeli prime minister, said.

The development comes as Israeli authorities are mulling over the deportation of a Filipina migrant worker and her teenage son born in Israeli-occupied territories.

Rosemarie Perez was arrested by immigration officials along with her 13-year-old son, Rohan, last week for visa overstays.

A Tel Aviv administrative tribunal ruled on Sunday that the two could be deported to the Philippines. They were taken to Ben Gurion Airport near Tel Aviv, but later taken off the plane.

This summer, the Israeli Interior Ministry's Population and Immigration Authority is planning to deport dozens of Filipina workers, whose visas were not renewed after they had children in the occupied territories.

Some 600 families could now face expulsion over a loss of residency status, according to the United Children of Israel (UCI) association.

In January 2018, Israeli officials approved a plan that asked asylum seekers to choose between indefinite detention in an Israeli prison or deportation to a third country in Africa.

Of the roughly 40,000 asylum seekers in Israel, Eritreans make up about 75 percent.

Most of them entered Israel via the Sinai Desert between 2006 and 2012, crossing over the Egyptian border before that route was cut off when Israel erected a fence in 2013.