TEHRAN, August 14 - The House of Commons is suffering a new wave of turbulence. Boris Johnson has said he wants to leave the EU with a deal, but the UK must leave, "do or die", by the latest Brexit deadline. 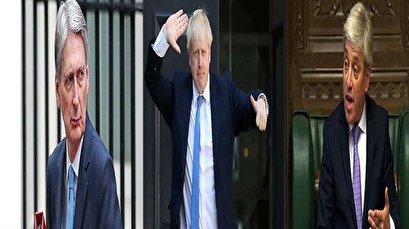 TEHRAN, Young Journalists Club (YJC) -To reach this aim, he could suspend Parliament, at any time in the two weeks running up to the 31st October deadline, to guarantee Brexit happens on that date.

A ComRes study for The Telegraph found that 44% of the public would back Johnson if he shut down Parliament in order to prevent MPs from stopping a no deal Brexit from taking place.

More than a third (37%) were opposed to the move, and John Bercow, the speaker of the House of Commons is one such person.

The suspension of Parliament is "anathema to me” said Bercow. He has vowed to block Johnson from proroguing parliament to force through a no-deal Brexit without the consent of MPs.

Bercow, who has previously said he he did not believe it would be possible to suspend parliament to force through no deal, told an audience at the Edinburgh Fringe festival on Tuesday, that he “strongly” believes the chamber ”must have its way”.

“I will fight with every breath in my body to stop that happening. We are a democratic society and parliament will be heard,” he claimed.

His remarks come as former chancellor, Philip Hammond, has accused the prime minister of trying to wreck the chance of a new Brexit deal by making demands the EU could never accept.

He warned that the PM would commit a betrayal of the referendum, if he enacted a no-deal Brexit, by listening to the “unelected” saboteurs “who pull the strings” of his government.

In his first intervention since resigning as chancellor, Hammond accuses Dominic Cummings, Johnson’s most senior aide, of attempting to force through a no-deal Brexit by making demands that Brussels “cannot, and will not, accede to”.

In an apparent swipe at Dominic Cummings, he said: “Not just because they will be stubborn in their defence of the single market (although they will), but because the fragility of their own coalition of 27 means any attempt, on their side, to reopen the package would see their unity collapse. They will not take that chance and the smart people in Whitehall know it.”

Hammond wrote in The Times: “The move from demanding changes to the backstop to demanding its total removal is a pivot from a tough negotiating stance to a wrecking one.”

“Most people in this country want to see us leave in a smooth and orderly fashion that will not disrupt lives, cost jobs or diminish living standards, whether they voted Leave or Remain in 2016,” he added.

In controversial statements a No 10 source said the UK would leave on 31 October despite Hammond's "best efforts to the contrary", while Amber Rudd, the Work and Pensions Secretary sounded a note of caution on Tuesday. Ms Rudd said she would urge the prime minister not to suspend parliament as part of his “do or die” commitment for Brexit.