TEHRAN, August 15 - How many other Earths are there? Scientists still aren't sure, but researchers have narrowed the range of possibilities. 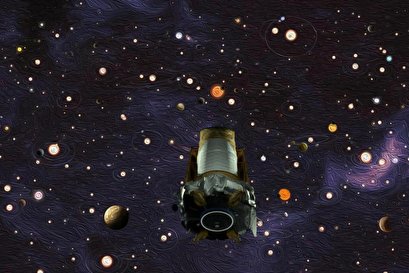 TEHRAN, Young Journalists Club (YJC) -In a new study, astronomers offered the most accurate formula yet for calculating the rate of Earth-like planets orbiting sun-like stars.

For the research, scientists surveyed the exoplanet discoveries made by NASA's Kepler space telescope, which identifies alien worlds by observing the dimming of stellar light as exoplanets transit across the face of their host stars. Scientists can use the transit data collected by Kepler to estimate the size of the planet and its distance from its host star.

"Kepler discovered planets with a wide variety of sizes, compositions and orbits," study author Eric B. Ford, professor of astronomy and astrophysics at Pennsylvania State University, said in a news release. "We want to use those discoveries to improve our understanding of planet formation and to plan future missions to search for planets that might be habitable. However, simply counting exoplanets of a given size or orbital distance is misleading, since it's much harder to find small planets far from their star than to find large planets close to their star."

To overcome this bias, Ford and his colleagues developed a model to analyze how many planets -- and at what range of sizes and orbital distances -- Kepler would find in a simulated universe.

"We used the final catalog of planets identified by Kepler and improved star properties from the European Space Agency's Gaia spacecraft to build our simulations," said co-author Danley Hsu, a grad student at Penn State. "By comparing the results to the planets cataloged by Kepler, we characterized the rate of planets per star and how that depends on planet size and orbital distance. Our novel approach allowed the team to account for several effects that have not been included in previous studies."

The simulations suggest approximately one in four sun-like stars host an Earth-like exoplanet, a planet three-quarters to one-and-a-half times the size of earth and with an orbital period between 237 and 500 days.

The research, published this week in the Astronomical Journal, could prove useful to scientists looking for signs of alien life on Earth-like planets. Understanding the relative abundance or scarcity of Earth-like exoplanets can help researchers properly scale their search efforts.

"Knowing how often we should expect to find planets of a given size and orbital period is extremely helpful for optimize surveys for exoplanets and the design of upcoming space missions to maximize their chance of success," Ford said.

Share to
Related News
Physicist:The Entire Universe Might Be a Neural Network
Astronomers find NO technological signs of alien life in a study of more than 10 MILLION star systems
Tags
predicts ، sun ، Earth
Your Comment