TEHRAN, August 15 - The United States should designate more critical habitat for the endangered green sea turtle, according to three environmental groups that say they will sue the government to force it to declare additional protected areas. 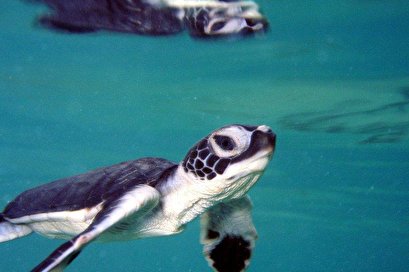 TEHRAN, Young Journalists Club (YJC) -The groups filed a formal notice of intent Tuesday to sue the Fish and Wildlife Service and Acting Secretary of the Interior David Bernhardt. The plaintiffs are the Center for Biological Diversity, Sea Turtle Oversight Protection and Turtle Island Restoration Network.

The lawsuit notification comes as the Trump Administration announced major changes to the enforcement and rule-making surrounding the Endangered Species Act. The new rules are to take effect 30 days after the administration publishes them in the Federal Register, but they only will impact new decisions.

Democrats in Congress have threatened to try to block the new rules, and several environmental groups have threatened more litigation, including the Center for Biological Diversity and Defenders of Wildlife.

The new rules would make it easier to remove species from endangered status, and curtail the ability of regulators to consider long-term effects of climate change on habitat.

"These guys with the Trump Administration won't have to deal with the impact of what they're doing," Whitecloud said.

A spokesman with the Fish and Wildlife Service said the agency won't comment on pending litigation.

Green sea turtles were almost wiped out in the 20th century, but have recovered to the point that their favorite beaches in Florida now host thousands of nests each year.

But they are threatened by plastic and fishing gear pollution, light pollution that confuses the babies after hatching and beach erosion that increases with climate change, rising seas and more frequent storms. Turtle meat and eggs still are eaten in some regions.

"There's a lot of things you can do to mitigate the damage done by climate change," Whitecloud said. "You'd want to do other things to help the species survive -- like enforce the lighting ordinances, or restrict activities that damage the nest area like beach raking, or by planting dune vegetation."

But the only designated green sea turtle habitat in the United States is in Culebra, a small island off the coast of Puerto Rico.

"The recovery of most green sea turtle populations is a beacon of hope in our changing oceans, but we've got to protect the places they live," said Jaclyn Lopez, Florida director at the Center for Biological Diversity.

"The Trump administration's moral and legal attacks on our country's greatest achievements extend all the way to the gentle and defenseless sea turtles," Steiner said.

Interior Secretary David Bernhardt has said he believes the changes to the Endangered Species Act will make the Fish and Wildlife Service more efficient while continuing to protect rare species.