Turkey set to open new military base in Qatar: Report

TEHRAN, August 15 - Turkey is reportedly expected to inaugurate a new military base in Qatar in autumn as the two countries forge close relations amid a Saudi-led blockade on Doha. 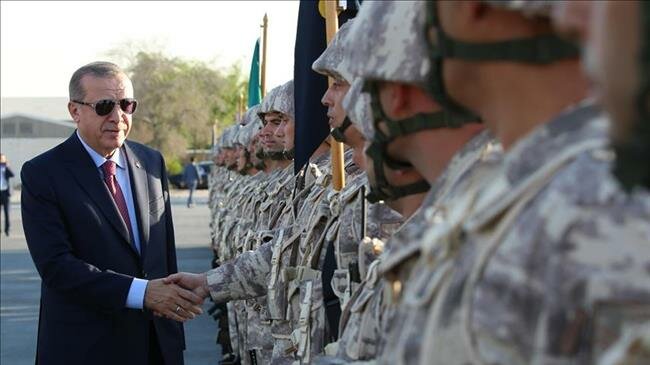 TEHRAN, Young Journalists Club (YJC) - The Turkish Hurriyet Daily News reported on Wednesday that the country had constructed a new facility adjacent to the Tariq Ibn Ziyad camp south of Doha, which was named the Qatar-Turkey Combined Joint Force Command in December 2017.

“The military base in Qatar is getting bigger. A new base has been built near the Tariq ibn Ziyad military base. The grand base’s, in which a myriad of social facilities exist, construction is completed,” the report said.

The number of Turkish soldiers in Qatar “will reach a drastic figure,” it added.

The report also noted that officials have been holding talks on a “grand opening” ceremony in autumn, with the Qatari Emir Sheikh Tamim bin Hamad Al Thani and Turkish President Recep Tayyip Erdogan in attendance.

The first batch of Turkish troops arrived in Qatar in 2015.

Some reports say about 3,000 Turkish forces are stationed in the Tariq Bin Ziyad base, which has a capacity for up to 5,000 military personnel.

Turkey has been a major supporter of Doha since June 2017, when Saudi Arabia, Bahrain, the United Arab Emirates and Egypt severed diplomatic and trade relations with Qatar.

They also presented Qatar with a list of demands and gave it an ultimatum to comply with them or face consequences.

Among the demands was that Qatar shut down the Turkish military base and halt military cooperation with Turkey.

Doha, however, refused to meet the demands and stressed that it would not abandon its independent foreign policy.

“All in all, the Gulf countries, especially Saudi Arabia, are uncomfortable with the Turkish-Qatari cooperation. In spite of all this, Turkey is trying to establish a durable security architecture and a military and political domain,” the report said.