TEHRAN, August 15 - Spain is willing to take some of around 150 migrants on a rescue ship that has been blocked from docking in Italy, under a broader deal being negotiated with other European nations, authorities in Madrid said on Thursday. 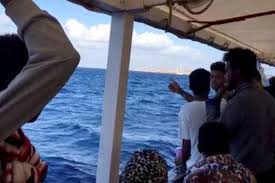 TEHRAN, Young Journalists Club (YJC) - The migrants have been in limbo since the vessel picked them up in the Mediterranean in early August, and Italy’s far-right Interior Minister Matteo Salvini - who has taken a hard line on refugee arrivals since he entered government in June 2018 - refused to allow them to disembark.

French and German officials confirmed talks were under way to resolve this latest in a series of flashpoint over immigration involving Italy, and one that has fuelled infighting in a coalition government in Rome that is close to collapse.

The ship, called the Open Arms and operated by a Spanish charity of the same name, was in Italian territorial waters on Thursday, a day after a Rome administrative court gave it leave to enter them, countermanding Salvini’s ban.

Spain’s government said it was working with other EU states and the European Commission to find a “common... and orderly solution” to the standoff, and was willing to “participate in a balanced distribution of migrants housed in the ship.”

Salvini, who heads the League party that forms part of the coalition, issued an emergency order to prevent Open Arms arriving at the Italian island of Lampedusa. But the defense minister, who is from the League’s partner party 5-Star, refused to countersign it.

Openly challenging the League leader, who has so far dictated Italy’s immigration policy, Elisabetta Trenta said defying the court was illegal and that “politics must not lose its humanity.”