TEHRAN, August 16 -The chief commander of Iran's Islamic Revolution Guards Corps (IRGC) says enemies of the Islamic Republic must take into account the country’s “globalized” power when making any plan with regard to Iran. 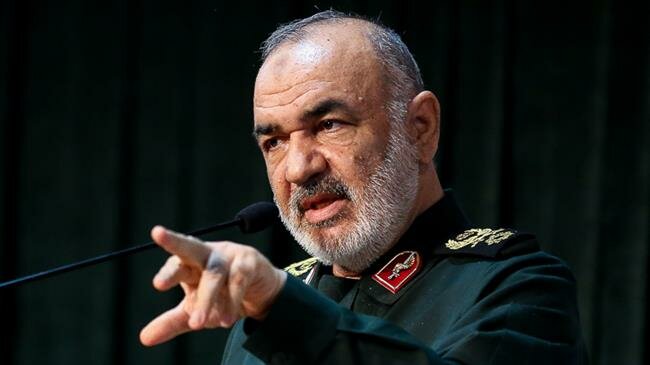 TEHRAN, Young Journalists Club (YJC) - Major General Hossein Salami made the remarks while visiting the IRGC’s forces positioned along northwestern Iranian mountains near the border cities of Sardasht and Piranshahr in West Azarbaijan Province on Thursday.

“Our message to the enemies is to take into account the power of the Islamic Iran, which has been taken to a global level, in all their calculations,” General Salami said.

The commander further defined the Islamic Republic as “an independent power” in the international arena, saying the country has managed to retain its economic, political, and cultural independence as well as its self-sufficiency in the area of military power, “[while staying] unaffected by international powers’ [machinations].”

“[Now], this structural independence [of Iran] has turned into an unparalleled model for the people of the world,” Salami asserted.

Commenting on the quality of the security governing the areas, which he was visiting, Salami hailed that the IRGC’s “devoted and revolutionary” servicemen enjoyed sweeping command over the entire northwestern mountainous areas that border the country’s neighbors, describing the level of security in these areas as a “monumental masterpiece” created by Iranian defense forces.

General Salami's remarks came a day after the commander of the Iranian Army's Air Defense Force also said that the country’s enemies did not dare try its defensive might and preparedness.

“If the enemy today has stopped at a distance of 200 miles away from the Strait of Hormuz and is pulling out its vessels from the Persian Gulf, it is because of [our] Armed Forces’ deterrence power, and the enemy knows that it cannot test Iran’s preparedness and defense might,” Brigadier General Alireza Sabahi-Fard said.

The commander added that the Iranian Army has beefed up its deterrence power to such a degree that it now forms a solid shield and will defend the country’s territory so powerfully that it will never cross enemies’ mind that they might launch an act of aggression against Iran.

"This system has high capabilities and can identify all types of cruise missiles, stealth planes, drone systems and ballistic missiles for a range of 400 kilometers," commander of the Iranian Army's Air Defense Force Brigadier General Alireza Sabahi-Fard said.

The Falaq is a phased-array radar system which can be incorporated into the country’s larger integrated air defense, further improving the radar coverage of existing systems, specifically that of the S-300.

The missile system will “significantly increase the country’s defense capabilities and power,” Hatami said, adding that Iran will also put on display a number of other military equipment on National Defense Industry Day.

Iran has made major breakthroughs in its defense sector and attained self-sufficiency in producing military equipment and hardware despite facing sanctions and Western economic pressure.

Iran has designed and manufactured different types of missile systems, including Talash and Bavar-373.

The Islamic Republic says its military power is solely meant for defensive purposes and does not pose any threat to other countries.