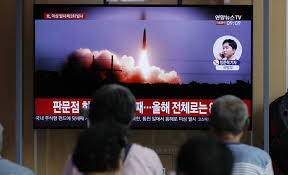 TEHRAN, Young Journalists Club (YJC) - South Korea's Joint Chiefs of Staff said the projectiles launched from the North's eastern coast flew about 230 kilometers (143 miles) on an apogee of 30 kilometers (18 miles) before landing in waters between the Korean Peninsula and Japan.

The Joints Chiefs of Staff said the U.S. and South Korean militaries were analyzing the launches but didn't immediately say whether the weapons were ballistic missiles or rocket artillery.

It was North Korea's sixth round of weapons launches since late July when it began stepping up its weapons demonstrations while expressing frustration over stalemated nuclear negotiations with the United States and continuance of U.S.-South Korea joint military drills that the North sees as an invasion rehearsal.

South Korea's presidential office said national security adviser Chung Eui-yong was presiding over an emergency National Security Council meeting about the launches and President Moon Jae-in was being briefed on the developments. The Blue House called for the North to stop launches that risk raising military tensions on the peninsula.

Japan's Defense Ministry said the North Korean projectiles did not reach the country's territorial waters or its exclusive economic zone. The White House said it was aware of reports of the launches and was consulting with Seoul and Tokyo.

The weapons the North tested in recent weeks included a new rocket artillery system and what security analysts say are two new short-range mobile ballistic missile systems that would potentially expand the North's ability to strike targets throughout South Korea, including U.S. bases there.