TEHRAN, August 16 - Zimbabwe’s main opposition MDC party succumbed to government pressure, calling off a street protest planned for Friday after losing a court challenge, as police set up roadblocks and barred access to its Harare offices. 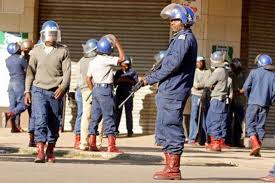 TEHRAN, Young Journalists Club (YJC) - A series of street demonstrations planned by the Movement for Democratic Change (MDC), which accuses the government of corruption and economic mismanagement, are viewed as a test of how President Emmerson Mnangagwa responds to dissent in a country tainted by a recent history of repression.

But police late on Thursday banned the protest planned for Harare on Friday, saying it would turn violent, and warned that anyone taking part would be committing a crime.

A High Court judge early on Friday dismissed an application by the party to overturn that ban, and MDC spokesman Daniel Molokele said it was calling off the demonstration in the capital.

However, protests planned next week in other cities would still go ahead.