US blocking release of Grace 1 to harass Iran: Analyst

TEHRAN, August 17 -The United States is trying to block the release of the Iran-operated Grace 1 supertanker in “an effort simply to harass Iran,” says a political analyst. 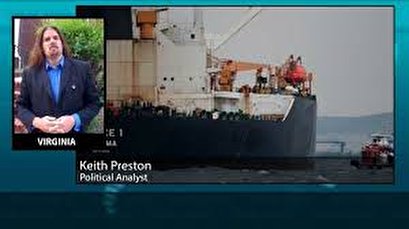 TEHRAN, Young Journalists Club (YJC) -On Thursday, Gibraltar’s government announced it was releasing the supertanker seized by British Marines in the Strait of Gibraltar despite pressure from the US for the vessel’s continued detainment.

Earlier on Thursday, Gibraltar said that the US had applied to seize the oil tanker after British media reported that the vessel’s release was imminent following a set of diplomatic exchanges between Tehran and London.

“This is an illegal action by the United States, it is obvious that what its purpose is, the purpose is simply to harass Iran,” Keith Preston told Press TV on Thursday.

“The Americans are trying to simply force Iran’s hand, they’re trying to continue to act in a provocative way against Iran,” he added.

“The American diplomatic apparatus” is clearly “trying to use this incident as a weapon against Iran,” he noted, saying, the US move “has no legitimacy according to the international law or anything of that nature.”

On Friday, the US Department of Justice (DOJ) unveiled a warrant for the seizure of the supertanker.

The warrant unveiled on Friday read, “A seizure warrant and forfeiture complaint were unsealed today in the US District Court for the District of Columbia alleging that Oil Tanker “Grace 1,” all petroleum aboard it and $995,000.00 are subject to forfeiture based on violations of the International Emergency Economic Powers Act (IEEPA), bank fraud statute, and money laundering statute, as well as separately the terrorism forfeiture statute.”

Britain’s naval forces unlawfully seized the Grace 1 and its cargo of 2.1 million barrels of oil in the Strait of Gibraltar on July 4 under the pretext that the supertanker had been suspected of carrying crude to Syria in violation of the European Union’s unilateral sanctions against the Arab country.

Tehran, however, rejected London’s claim that the tanker was heading to Syria, slamming the seizure as “maritime piracy.”