TEHRAN, August 17 -China has warned the United States against moving forward with a new controversial plan to provide self-ruled Taiwan with F-16 fighter jets, saying Washington will be held responsible “for all related consequences.” 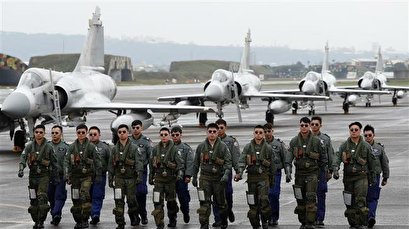 TEHRAN, Young Journalists Club (YJC) -In yet another move to further escalate tensions with Beijing, US President Donald Trump approved an $8 billion sale of F-16 fighter jets to Taipei on Friday.

In a quick response, Chinese Foreign Ministry spokeswoman Hua Chunying said such moves "severely violate" the one-China policy and that Washington should “fully recognize the highly sensitive and harmful nature of the relevant issue.”

"Otherwise, the Chinese side will surely make strong reactions, and the US will have to bear all the consequences.” she said.

"China firmly opposes this and has lodged stern representations with the US," she said. "It must be stressed that the Taiwan issue concerns China's sovereignty, territorial integrity and security interests."

China has sovereignty over the island and almost all world countries recognize that sovereignty under the policy known as One China.

Beijing has constantly warned the US over its relations with Taiwan. The US, too, recognizes Chinese sovereignty over the island, but it has long courted Taipei in an attempt to counter Beijing.

Taiwan’s President Tsai Ing-wen said in March that the US was responding positively to Taipei’s requests for new arms sales to bolster its defenses in the face of what she described as pressure from China.

Late in July, the US approved a major possible arms sale to the Tsai government that estimated to be worth 2.2 billion dollars.

The latest plan to sell 66 fighter jets to the island would be the largest or one of the largest single arms package transactions between Washington and Taipei.

Some analysts suggest China would react by imposing sanctions on American companies involved in the sale.

The sale, which is approved at a particularly consequential time in US-China relations, is expected to further escalate tensions on an already bitter trade war.

President Trump initiated a trade war with China last year, when he first imposed unusually heavy tariffs on imports from the country, seeking extensive structural changes from Beijing and alleging that it had engaged in intellectual property theft over many years, which China vehemently denies.