India envoy happy with positive trend of trade with Iran

India envoy happy with positive trend of trade with Iran

TEHRAN, August 18 - India’s ambassador to Iran says trade between the two countries is on a positive trajectory despite sanctions imposed by the United States which have hampered New Delhi’s energy imports from Tehran. 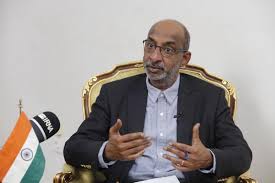 TEHRAN, Young Journalists Club (YJC) - “Both Iran and India are large, developing economies with solid fundamentals. Both countries are benefiting from their respective demographic advantages. I see our economic partnership as being on a positive trajectory,” said Gaddam Dharmendra in an interview with Iranian ILNA news agency published on Saturday.

Dharmendra said US sanctions had created new opportunities for trade between India and Iran, saying the two countries have significantly increased bilateral trade since sanctions were imposed on Iran in November.

"India-Iran bilateral trade stands at more than $ 17 billion (2018-19). This is an increase of 25%,” he said, adding, “At present, commodities like Basmati rice, Soybean meal, black tea and cane sugar are seeing an upward trend.”

The ambassador further insisted that US bans would not deter India from expanding its ties with Iran, saying that trade between the two countries would further increase.

India was the second top buyer of Iran’s oil before May when the US government removed waivers granted to New Delhi for energy imports from Tehran.

However, Indian and Iranian companies have expanded their exchanges thanks to a new mechanism for settlement of payments.

The special-purpose vehicle (SPV) has allowed importers and exporters to carry out payments in local currencies. Dharmendra said the Iran-India financial instrument was working properly regardless of outside pressures.

“This mechanism enables us to meet some of Iran's basic needs, including pharmaceuticals. In fact, we have set up our SPV and we are happy about that,” said the envoy.