TEHRAN, August 18 -Syrian government forces, backed by fighters from allied popular defense groups, have gained more ground against Takfiri militants in the southern edge of the country’s northwestern province of Idlib in their latest offensive that was launched last week. 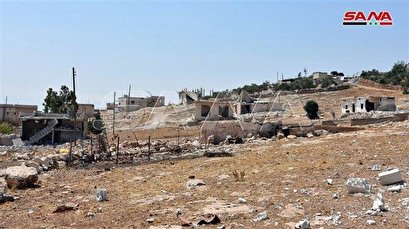 TEHRAN, Young Journalists Club (YJC) -On Sunday, Syrian army troops and their allies could establish full control over Kfaridoun and Sabbaghiyah farms, which lie in an area between the towns of Madaya and Kafrsajna.

Earlier in the day, Syrian soldiers had managed to regain control over Tal Kfar Idoun area, which is located west of a key highway that connects the capital Damascus with the strategic northern city of Aleppo.

Meanwhile, the so-called Syrian Observatory for Human Rights said there were “fierce clashes” between foreign-backed militants and pro-government forces one kilometer west of Khan Sheikhun, which serves as a major bastion of Takfiri terrorists.

The Britain-based war monitor said the latest fighting broke out overnight Saturday to Sunday, and has already killed two militants and 11 members of the pro-government forces.

Observatory head Rami Abdel Rahman said Syrian forces managed to retake the village of Tel al-Nar and nearby farmland northwest of Khan Sheikhun on Sunday and were closing in on the highway.

The government troops’ advance towards Khan Sheikhun will make the situation more difficult for militants in their last remaining pocket of territory in the neighboring province of Hama, including the towns of Morek, Kafr Zeita and Latamneh.

Over the past few days, Syrian government forces and allied fighters have been advancing in a bid to encircle Khan Sheikhun from the north and the west and seize the highway. They are deployed about three kilometers from the road.