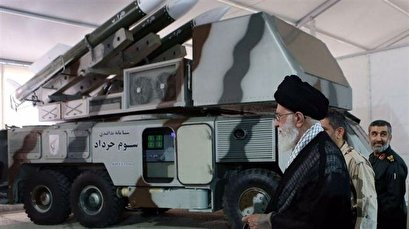 TEHRAN, Young Journalists Club (YJC) -According to Abdollah Haji-Sadeqi, the Leader asked him to convey the message to the IRGC’s servicemen when he called on Ayatollah Khamenei for "guidelines" after the downing and the seizure of the tanker in June.

“Send regards and tell [them] ‘more power to your elbow. You accomplished a remarkable feat',” the Leader said.

Haji-Sadeqi made the announcement on Sunday while visiting a strategic southern area known as Naze’at, which is comprised of four islands in the Persian Gulf, ISNA reported.

On June 21, US President Donald Trump tried to play down the aircraft’s downing by saying, "It's hard to believe it was intentional, if you want to know the truth."

He alleged that the strike could have been carried out by someone who was acting "loose and stupid," without the endorsement of Iran's top authorities.

The IRGC shot down the intruding American spy drone in the country’s southern coastal province of Hormozgan. In a statement issued on June 20, the elite defense force said the US-made Global Hawk surveillance drone  had been brought down by its Air Force’s indigenous Khordad-3 air defense system near the Kouh-e Mobarak region — which sits in the central district of Jask County — after the aircraft violated the Iranian airspace.

The IRGC also legally seized the 30,000-tonne UK-flagged Stena Impero tanker, which had collided with an Iranian fishing boat and ignored its recurrent distress calls, on July 19.

The Leader’s representative reminded that the US aircraft was “the best-equipped, state-of-the-art, and most expensive American drone.”

The aircraft was successfully downed while flying more than 90 kilometers (55 miles) away at an altitude of 5.16 kilometers (16,929 feet), he added.