TEHRAN, August 19 - Hong Kong is gearing up for further protests this week after hundreds of thousands of anti-government demonstrators braved heavy rain to rally peacefully on Sunday, marking a change to what have often been violent clashes. 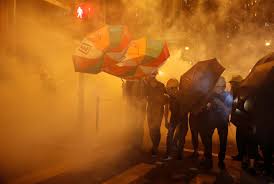 Some activists had apologized for the airport turmoil and on Sunday night protesters could be seen urging others to go home peacefully.

Police said on Monday that while Sunday’s demonstration was mostly peaceful, there were breaches of the peace in the evening when some protesters defaced public buildings and aimed laser beams at officers.

It was a far cry from the violent clashes between protesters and riot police throughout the summer, with activists storming the legislature and targeting China’s main Liaison Office in the city. The weekend was also noteworthy for a lack of tear gas use by police.

The protests, which have presented one of the biggest challenges for Chinese President Xi Jinping since he came to power in 2012, began in June as opposition to a now-suspended bill that would allow suspects to be extradited to mainland China for trial in Communist Party-controlled courts. They have since swelled into wider calls for democracy.

Hong Kong returned from British to Chinese rule in 1997 under a “one country, two systems” formula that promised wide-ranging freedoms denied to citizens in mainland China, including an independent judiciary, but many in the city believe Beijing has been eroding those freedoms.