TEHRAN, August 20 - One of the two political groups forming Italy's agonizing government, the 5-Star Movement, has said its former ally and the leader of the far-right League, leader Matteo Salvini is an unreliable interlocutor, without credibility. 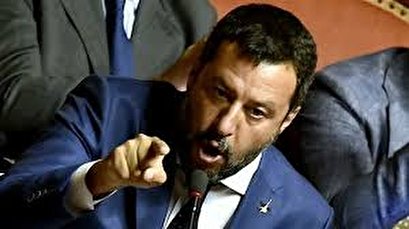 TEHRAN, Young Journalists Club (YJC) -The comments have been made after Interior Minister Salvini tried to patch things up after terminating a 14-month 5SM-League government earlier this month and calling for snap elections that could crown him as prime minister.

The 5SM political leader Luigi Di Maio have said Salvini is now trying a "shameful U-turn" after offering him to find a new accord on the terms of their alliance.

The Italian media have reported that center-left Democratic Party and its former rivals the Five Star Movement seem inclined to put aside their differences to discuss ways to shape a new government avoiding snap elections, thwarting this way Salvini's ambitions to become prime minister.

On Monday, however, Five Star Movement minister for relations with parliament, Riccardo Fraccaro, and Justice Minister Alfonso Bonafede denied their movement would make a government deal with Renzi.

On Tuesday, August 20 Italian Prime Minister Giuseppe Conte is slated to brief the Senate over Italy's political crisis after the far-right League's leader Salvini filed a no-confidence motion in his executive. In the upper house Conte could face a vote of no confidence or may choose directly to resign.