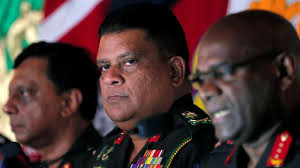 TEHRAN, Young Journalists Club (YJC) - The new commander, Maj. Gen. Shavendra Silva, who was also promoted to the rank of lieutenant general, was in charge of the 58th Division which encircled the final stronghold of the Tamil Tiger rebels in the last stages of the civil war in 2009. Rights groups have accused the division of violating international human rights laws, including shelling a hospital.

Silva's appointment comes as President Maithripala Sirisena and his government face criticism that they failed to heed warnings ahead of a series of suicide bomb attacks in April. The attacks by two local groups that had pledged allegiance to the Islamic State group killed more than 260 people.

Silva is respected by many in Sri Lanka's ethnic Sinhalese majority. He has denied attacking the hospital in the final stages of the war.

The government declared victory over the rebels in May 2009, ending the Tamil Tigers' 26-year campaign for an independent state for minority ethnic Tamils. Both the Sri Lankan military and the rebels have been accused of wartime abuses.

The United Nations has said some 45,000 ethnic Tamil civilians may have been killed in the final months of the conflict.