US to punish anyone who ‘touches or supports’ Iran-run tanker: Pompeo

TEHRAN, August 21 -US Secretary of State Mike Pompeo warns that anyone who “touches or supports” an Iran-operated supertanker, previously called the Grace 1, will be punished with US sanctions. 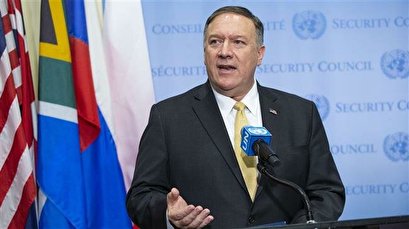 “If that ship again heads to Syria, we will take every action we can consistent with those sanctions to prevent that.”

Britain’s naval forces seized the Grace 1 and its cargo of 2.1 million barrels of oil in the Strait of Gibraltar on July 4 under the pretext that the vessel might be carrying crude oil to Syria in violation of EU sanctions on Damascus.

Iran says the UK’s reason for confiscation is not valid because Tehran is not a member of the EU and therefore its sanctions do not apply to the country. Moreover, the tanker was never headed to Syria, according to Iranian officials.

The tanker, which has been renamed the Adrian Darya 1, left anchorage off Gibraltar on Sunday after being released.

According to reports, the vessel was heading to Greece after the release.

“The vessel is cruising at low speed and there is still no formal announcement that it will arrive at Kalamata. The Merchant Marine Ministry is monitoring the matter along with Greece’s Foreign Ministry,” a Greek Shipping Ministry spokesman said on Tuesday.

Since Gibraltar released the tanker on Thursday, Washington had launched a flurry of efforts to keep the tanker from leaving.

On Friday, the US Department of Justice unveiled a warrant for the seizure of the supertanker. Iran, however, has warned the US against trying to seize the vessel again.

Many reports, including from Gibraltar, along with later statements from Spain's Spanish Foreign Minister Josep Borrell, have shown that the tanker's seizure had been ordered by Washington.

The tanker seizure took place as the US had pledged to reduce Iran’s oil exports to “zero” as part of sanctions that it reinstated after leaving a multilateral 2015 nuclear deal with Iran last year.

Tensions have since further escalated between the two countries, with the US military announcing the deployment of additional military forces to the Middle East, citing unspecified “threats” from Iran.