US prepared to resume talks with North Korea: Envoy

TEHRAN, August 21 - The United States is prepared to resume nuclear negotiations with North Korea as soon as Pyongyang is ready, a senior US diplomat says. 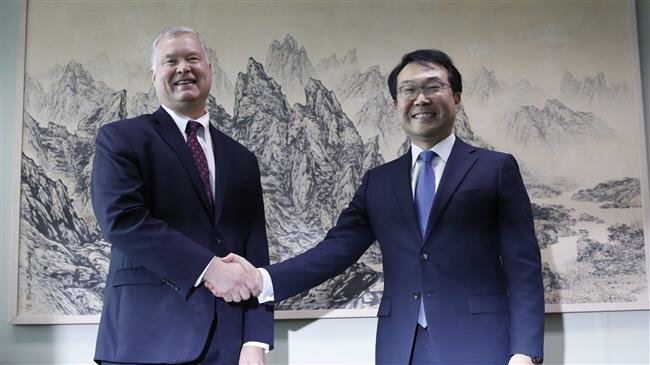 TEHRAN, Young Journalists Club (YJC) - US special representative for North Korea Stephen Biegun, who is in Seoul for talks with South Korean officials, told reporters on Wednesday, “We are prepared to engage as soon as we hear from our counterparts in North Korea.”

Biegun said US President Donald Trump had assigned his team to restart working-level talks with North Korea in line with what Trump and North Korean leader Kim Jong-un agreed on during a third meeting in late June.

“I am fully committed to this important mission and we will get this done,” the US envoy said.

Earlier this month, Trump said that he had received a “beautiful” three-page letter from Kim and that the North Korean leader called for the resumption of nuclear talks after the US-South Korean joint drills ended on August 20.

Pyongyang censured the 10-day annual drills and carried out its own missile tests.

That thaw later led to two summits between Trump and Kim to discuss the demilitarization of the Korean Peninsula, the first of which was held in Singapore in June last year and the second in Vietnam in February.

The Singapore summit made little progress, mainly because Washington refused to lift its harsh sanctions on North Korea. The second one ended in failure as Trump abruptly walked away from the summit.

In their third, brief meeting at the Demilitarized Zone separating the two Koreas in late June, Trump and Kim agreed to kick-start working-level talks.

Since late July, Pyongyang has conducted a number of weapons tests, described by Seoul as short-range ballistic missiles. Trump has downplayed the launches, saying that other countries also test the same missiles.