France wants progress in Ukraine before Russia returns to G7

France wants progress in Ukraine before Russia returns to G7

TEHRAN, August 21 - Russia’s readmission to the Group of Seven nations depends on progress in Ukraine peace talks, a French diplomatic source said, responding to comments by U.S. President Donald Trump that Moscow should be allowed to rejoin the group. 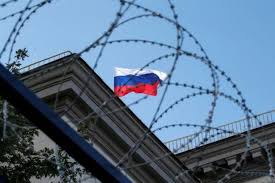 TEHRAN, Young Journalists Club (YJC) -  “We have taken note that the Americans want to reintegrate them next year. Ukraine is vital. There is a context that could be favourable to some progress,” the diplomatic source said on Wednesday, referring to comments by the new Ukrainian president.

Russia was pushed out of the G8 in 2014 because of its annexation of Crimea from Ukraine. The European Union subsequently slapped sanctions on Moscow after it supported rebels fighting Kiev troops in the east of the country.

It is not the first time that Trump has floated the idea of Russia getting back together with the G7, which groups the United States, Germany, Japan, France, Britain, Italy and Canada. Their leaders meet this weekend in the southwestern French town of Biarritz.

France holds the group’s rotating chair this year and will hand over to the United States in 2020. CNN reported that in a call with Trump on Tuesday, French President Emmanuel Macron had suggested Russia return to the fold next year.

The French source neither confirmed nor denied that Macron had made the suggestion. Until now, Macron has repeatedly said there had to be progress on the crisis in Ukraine before Russia could return to the G7.

Speaking alongside Russian President Vladimir Putin on Monday, Macron repeated that position, but insisted that there was a window of opportunity to make progress on the crisis after new President Volodymyr Zelenskiy on Aug. 6 pressed Putin for a resumption of peace talks.

The French ambassador was expelled from Belarus

Members of the parliament's National Security Commission visit the president

The Tajikistan ambassador meet with the Iranian Minister of Energy

Venezuelan Foreign Minister: Iran is a strategic friend of Venezuela

The first shipment of Corona vaccine from Italy to Iran

Doha: Efforts are underway to stabilize the ceasefire in Gaza