US military confirms lost drone to Houthi fire over Yemen 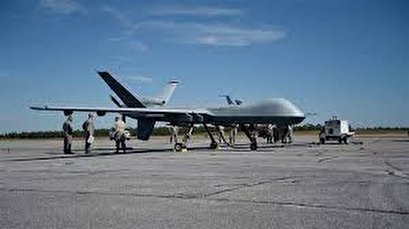 TEHRAN, Young Journalists Club (YJC) -Two military officials within the administration for President Donald Trump said Wednesday on condition of anonymity that the drone, which was shot down over Yemen's Dhamar governorate on late Tuesday, belonged to the US military.

One official said the drone was destroyed by a surface-to-air missile operated by the Houthi forces.

Another official said it was too early to say with certainty who was behind the attack.

US National Security Council spokesman Garrett Marquis rushed earlier in the day to point the finger at Iran, repeating the refuted claim that Tehran was providing the Ansarullah with advanced weaponry, including air defense missiles.

US Central Command also said that it was investigating the attack, with spokesman Lt. Col. Earl Brown also raising the same allegation.

An Ansarullah spokesman had made it clear on Tuesday that the missile was “developed locally.”

The United States and its allies – including Saudi Arabia and the United Arab Emirates, who are leading a years-long war on Yemen – have implied in the past that Iran is arming the Houthis with advanced missiles and other types of weapons.

Both Iran and Yemen have denied the claims, arguing that the ongoing aerial and maritime blockade by Saudi Arabia has made it impossible to get medical aid and food to millions of starving people in the impoverished country let alone missiles and weapons.

This was the second US military drone downed by the Houthis over Yemen since June, when they shot down another Reaper.

US military forces regularly use drones and warplanes based in the region to carry out strikes against what they claim are positions of the al-Qaeda affiliate, al-Qaeda in the Arabian Peninsula.

Despite being at a massive disadvantage compared to Saudi Arabia’s well-equipped army – which has the world’s third largest military budget – the Houthis have been able to push back against the deadly aggression by developing a robust arsenal of ballistic missiles and attack drones in coordination with the Yemeni army.

The Houthis have so far attacked a number of strategic airports and oil facilities deep inside the kingdom.

They have also advanced air defense systems in their possession which allow them to shoot down Saudi and American drones on a regular basis.