TEHRAN, August 21 - Providing a keynote address at the ceremony, the Iranian President discussed the recent American implemented plots against Iran. 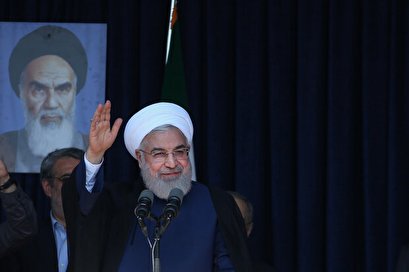 TEHRAN, Young Journalists Club (YJC) -Providing a keynote address at the ceremony, the Iranian President discussed the recent American implemented plots against Iran.“It is for two years that the US has started a new conspiracy plot against Iran,” he said.

“Primarily, they were psychological and political plots and the economic war came afterward,” he noted, “but none of them were successful to get us depressed.”

“America has never been weaker, more insidious and isolated in political and legal terms as it is today,” Rouhani said.

“Today, all of our domestic indicators, whether economic, cultural or social, tell us that our situation is better than it was last year. People live in peace and the stability of the economic market is greater. This is illustrated by statistics in the recent months about inflation, non-oil exports as well as the stock market, which has experienced above 140 percent growth,” he said.

He added that the US has not been able to reinforce itself in the region and all of its plots have failed.

“The question to ask Americans is what did you do in the region? Did you strengthen your position in the region? You wanted to put Israel in a new position, did you succeed? You wanted to keep the terrorists as your tool to use them whenever you needed them, could you do that? You said you would leave Iraq soon, but you lied,” Rouhani said.

“You have been claiming for some years that you will leave the Persian Gulf, leaving it to your minion, UK, but you lied and are not gone. You vowed to leave Afghanistan but you lied. You said you were not involved in killing people but you were designer or the executor of all the catastrophes occurred the region or provided help to the aggressors. So what did you do for our region? What have you been doing since 2000? What did you do in Afghanistan, Lebanon, Iraq, Palestine, Syria and Yemen? You added a problem every day to the problems of the region,” he added.

The Iranian president noted that the US major allies besides major world powers including Germany, UK, Canada, China and Russia do not believe in Americans anymore.

Referring to the US-Denmark recent spat ignited by Trump’s proposal about purchasing Greenland, Rouhani said urge the US to respect the legal rights of other countries.

Addressing Americans, Rouhani said “if you seek to ensure security in the region that cannot be done without Iran."

“Iran is a major and influential power in the Middle East and in particular the Persian Gulf, Strait of Hormuz and Oman Sea and is ready to provide security of international sea routes, only in case you stop your aggressions,” Rouhani said.

Announcing Iran’s readiness for conducting negotiations with regional Islamic countries, he said “everyone will benefit a secure region and friendly relations.”

“International sea routes including Red Sea, Mediterranean, Gibraltar, Indian Ocean and all other ones across the globe must be safe,” he underlined.

On Thursday, Rouhani ordered the addition of home-made Bavar-373 missile defense system to the country’s network of air defense. The ceremony was held today with senior military officials, including Defense Minister Brigadier General Amir Hatami in attendance. The President also paid tribute to martyrs and reviewed the honour guards and then visited the exhibition for achievements and capabilities held by the Ministry of Defence and Armed Forces’ Logistics.

Rouhani also visited various parts of the domestically-built Bavar-373 Air Defence System, including launcher, detection radar, tracking radar, Sayyad-4 missile, and the Command and Control Centre, and was briefed by the Minister of Defence and Armed Forces’ logistics and defence industry specialists on the development process of the system and its functionality.

Bavar-373 is a mobile missile defense system designed to intercept and destroy incoming hostile targets flying at altitudes of up to 65 kilometers. The system employs missiles that have a maximum range of 300 kilometers. The long-range defense system is capable of detecting up to 100 targets simultaneously and engages six targets at a time. The system is a competitor to Russia’s S-300 missile system and brings quite a few substantial upgrades over its Russian equivalent.