TEHRAN, August 21 - The chief commander of the Islamic Revolution Guards Corps (IRGC), Iran’s elite defense force, says no array of countries other than the Persian Gulf’s own littoral states can provide the region’s security. 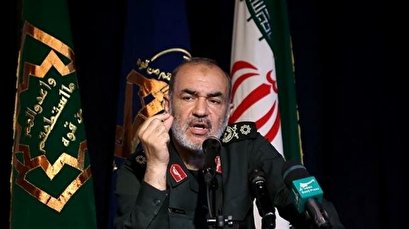 TEHRAN, Young Journalists Club (YJC) -Major General Hossein Salami, who was speaking from the holy city of Mashhad on Thursday, said, “We believe in a regional security system, which is partaken in by the Persian Gulf [littoral] states, and consider foreign presence in the Persian Gulf to be contradictory to [the essence of] security.”

He described any other security mechanism other than one, in which Iran and the rest of the regional states play the pivotal role, as “unfeasible,” reminding that all past experiences of foreign presence under the guise of security missions have only resulted in “escalation of tensions and even warfare.”

The United States has announced plans to form a coalition to supposedly protect shipping in the Strait of Hormuz following a series of mysterious attacks on oil tankers in the strait and the Sea of Oman.

Washington has accused Iran of having a hand in those attacks, a claim Tehran has strongly rejected. Tehran has warned that such sabotage operations may be part of a general ploy to target Iran amid increasing regional tensions.

The US has asked its allies to join the coalition, a call which has not been warmly received by several countries, including Germany, Japan and Spain, over apparent fears that such a mission could further ratchet up tensions with Iran.

Separately, the senior defense official refuted the concept held by the country’s enemies that sanctions had acted to destroy and weaken its economy.

He called the bans “instruments of our development and advancement.”

The US’s self-styled restrictive measures have provided the Islamic Republic with room for better availing itself of its national and indigenous capacities, he concluded.

The US returned its bans against Iran last year after leaving a nuclear agreement reached between Tehran and major world powers in 2015.

Iranian officials have recurrently scoffed at Washington’s misguided belief that the measures would bring Tehran to the negotiation table by taking a fast toll on the country’s economy.