TEHRAN, August 24- Russia has reportedly launched the world’s first floating nuclear power plant, hauling it in an epic 6,000-kilometer journey to a remote Siberian town near the US state of Alaska. 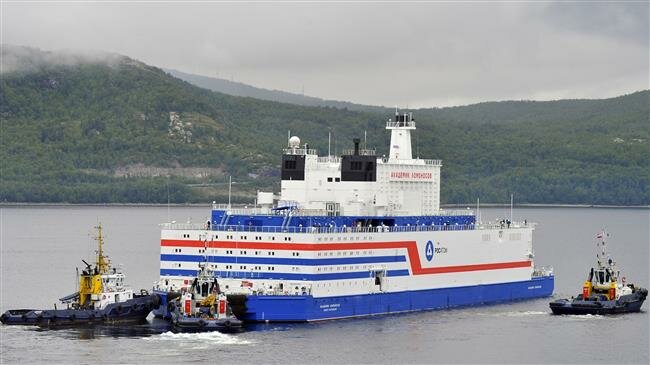 TEHRAN, Young Journalists Club(YJC) _The vessel Akademik Lomonosov left its dock on Friday, heading to the arctic town of Pevek in northeastern Siberia, loaded with nuclear fuel on its two 35-megawatt reactor systems.

The ship, named after Russian polymath, scientist and writer Mikhail Lomonsov, has a crew of 69 and travels at a speed of 3.5 to 4.5 knots.

According to Russia's Rosatom state nuclear energy corporation, the 21,000-ton barge will replace a coal-burning power plant and an ageing land-based nuclear plant.

It will dock at the port in Pevek nearly 90 kilometers from Alaska, supplying 5,000 people in the area with electricity.

Rosatom has described the huge vessel as a "pilot project" with plans for its extensive development and use of similar designs.

The floating reactor is part of a larger scheme to provide energy to remote regions within Russia as well as the rest of the world, the agency says.

Vessels such as the Akademik Lomonosov, with an overall 40-year life cycle that may be extended to 50 years, can be used to power desalination plants for island countries with shortage of fresh water, the agency said.