TEHRAN, August 26- President Hassan Rouhani said Iran has kept the road to diplomacy open to resolve the differences with the West, but meantime, reiterated that national resistance is still top on his agenda, an indication that no charming result should be expected from Foreign Minister Zarif's surprise visit to France on Sunday. 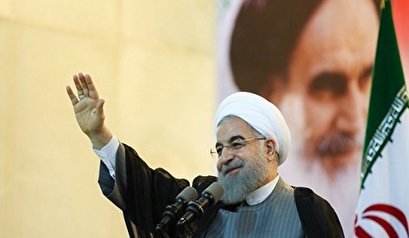 TEHRAN,Young Journalists Club(YJC) _"We resist against sanctions, and meantime we take reciprocal moves as well; yet we also see an opportunity for negotiations and diplomacy too and leave open the path for resolving problems by 2-month intervals between the phases of modifying our (nuclear deal) undertakings," Rouhani said, addressing a forum in Tehran on Monday.

"We will resist and stand to attain goals, security and greatness," he added.

"We also negotiate to resolve the problems beside this resistance and standing," Rouhani underscored.

Rouhani's emphasis on resistance and Tehran's insistence on an honorable practice of foreign policy came a day after Foreign Minister Mohammad Javad Zarif flew to the French seaside resort of Biarritz that hosts the G-7 summit meeting in an unannounced trip ahead of his Southeast Asian tour on Sunday.

"There won't be any meeting or negotiations with the US delegation during this visit," he reiterated.

An Elysee palace official confirmed the Iranian spokesman's statement that Zarif is not to take part in any meeting with US officials in Biarritz.

After a nearly weeklong visit to Europe, during which he held high-level talks with European officials in Finland, Sweden, Norway, Zarif met with French President Emmanuel Macron and Le Drian in Paris on Friday. The Iranian foreign minister told reporters, after his meeting with Macron, that he had constructive talks with the French head of state, but meantime reiterated that Tehran will never re-negotiate the nuclear deal of 2015, officially known as the Joint Comprehensive Plan of Action (JCPOA).

Macron has made restarting negotiations with Iran a priority at the ongoing G-7 summit, after his Friday meeting with Zarif and earlier phone talk with Iranian President Hassan Rouhani.

Zarif is due to start a three-legged tour of East Asia on Sunday night that will take him to China, Japan and Malaysia, to further bolster bilateral ties and discuss major regional and international developments. Tehran has long-enjoyed close relations with a number of Asian and East Asian countries as part of a greater policy of diversifying and strengthening its foreign relations.

Tensions mounted between Tehran and Washington last May, when President Donald Trump pulled the United States out of the 2015 nuclear deal with Iran, and re-imposed harsh sanctions against the Islamic Republic in defiance of global criticism. The American leader and his hawkish advisers National Security Advisor John Bolton and Secretary of State Mike Pompeo have since been stepping up pressure against Iranians.