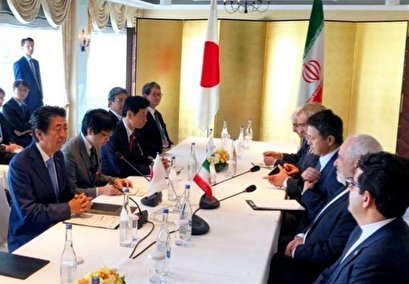 TEHRAN,Young Journalists Club (YJC) -The top Iranian diplomat, who has travelled to Japan after visiting China, held a meeting with the Japanese prime minister in Yokohama on Wednesday.

In the meeting, Zarif and Abe discussed Tehran-Tokyo bilateral ties, the latest developments and diplomatic activities surrounding the implementation of the Joint Comprehensive Plan of Action (JCPOA), major regional and international developments, including the situation in the Persian Gulf and the Middle East, and other issues of mutual interest.

The meeting came as Abe co-hosts a three-day international conference on African development in in Yokohama.

On Wednesday morning, Zarif delivered a speech at the Japan Institute of International Affairs (JIIA) about Iran’s foreign policy, the future prospect of the JCPOA, and regional tensions. He also answered questions from prominent Japanese scholars, researchers, business people, and journalists.

In another gathering on Wednesday, Ken Matsuzawa and Hiroyuki Yushita, the president and senior managing director of the International Friendship Exchange Council (FEC) of Japan, met with Zarif in his residence and briefed the Iranian diplomat on their efforts to promote ties with Iran.

Zarif also had a meeting with his Japanese counterpart Taro Kono on Tuesday.

Heading a diplomatic delegation, Zarif is on a tour of Asia that took him earlier to China. He will be visiting Malaysia afterwards.

Zarif has made several foreign trips in recent weeks, after being blacklisted by the US government.

Before the tour of Asia, the Iranian top diplomat visited Kuwait, three Scandinavian capitals, and France.