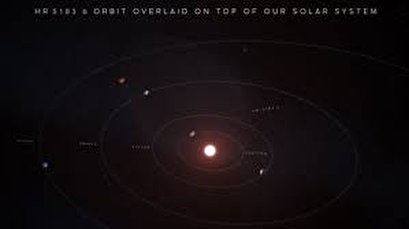 TEHRAN,Young Journalists Club(YJC) -The massive exoplanet, three times bigger than Jupiter, boasts a highly elliptical orbit. If the planet's orbit was placed around our own sun, the giant would swing from beyond Neptune, inside the asteroid belt and back out.

Most planets with oblong orbits are found in the inner portions for their solar system, but the newly discovered exoplanet exists on the outskirts of its distant solar system.

Astronomers described the unusual world this week in the Astronomical Journal.

"This planet is unlike the planets in our solar system, but more than that, it is unlike any other exoplanets we have discovered so far," Sarah Blunt, first author of the new study and a graduate student at the California Institute of Technology, said in a news release. "Other planets detected far away from their stars tend to have very low eccentricities, meaning that their orbits are more circular. The fact that this planet has such a high eccentricity speaks to some difference in the way that it either formed or evolved relative to the other planets."

Scientists used the radial velocity method to identify the giant planet, HR 5183 b, and its unusual orbit. The method entails measuring the wobble of a star's light as it is pulled by the gravity of the passing exoplanet. Because planets that orbit their stars at a considerable distance can take a long time to complete an orbit -- hundreds of years, even -- using the radial velocity method to study outer exoplanets requires several years of observations.

"The key was persistence," said Andrew W. Howard, a professor of astronomy at Caltech. "Our team followed this star with Keck Observatory for more than two decades and only saw evidence for the planet in the past couple years! Without that long-term effort, we never would have found this planet."

Astronomers have been monitoring the planets surrounding HR 5183 since the 1990s, but have yet to observe a full orbit of HR 5183 b. The planet takes between 45 and 100 years to complete a single orbit. However, scientists were able to measure the slingshot portion of the planet's trip around its sun.

"This planet spends most of its time loitering in the outer part of its star's planetary system in this highly eccentric orbit, then it starts to accelerate in and does a slingshot around its star," said Howard. "We detected this slingshot motion. We saw the planet come in and now it's on its way out. That creates such a distinctive signature that we can be sure that this is a real planet, even though we haven't seen a complete orbit."

As to how the planet ended up with such an extreme orbit, scientists estimate another planet was involved. Most likely, a neighborhood rivalry, with dueling gravitational forces, left one planet expelled and the survivor with an egg-shaped orbit.