TEHRAN, August 29 -The power-shifting events of the summer — Iran downing a US drone, Iran sequestering a British-flagged ship, Iran proving itself as the new police of the Persian Gulf — show that Iran is not just willing to fight but is able to win. Indeed, why should water be any different? In recent years Iran has won on land in Syria, Iraq, Lebanon and elsewhere. 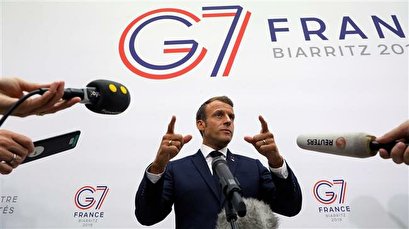 TEHRAN,Young Journalists Club(YJC) -The latest G7 summit was held in Biarritz, France, and as PressTV’s Paris correspondent I thought about heading down there…but it seemed like a waste of the Iranian taxpayer’s money. What is the G7, after all? It began in 1975 to increase coordination between the neo-imperialist victors of World War II and their formerly fascist enemies, who reconciled with the goal of blocking the progress of socialist nations and increasing their dominance over non-aligned ones.

The G7 nations remain far more united than divided, despite the Mainstream Media’s claims, and one simply has to look at the central bank collusion between these economies since the fall of Lehman Brothers for yet more proof. However, there is genuine (but moderate) disagreement on Iran.

After supporting 40 years of cold war on Iran, Europe is no longer as completely anti-Iranian as Washington. Another way of saying that is, “Europe is only rabidly Iranophobic and Islamophobic 16 hours a day instead of 24.” Regardless, Iranian diplomats are paid to work and Foreign Minister Mohammad Javad Zarif did just that, surprisingly, at the summit.

Zarif spoke with French President Emmanuel Macron on Friday and then addressed multiple G7 leaders on Sunday. Zarif’s landings in “the Hexagon,” as France is rather unimaginatively referred to here, are a clear slap in the face to the US. In June, some analysts pondered the possibility of mental illness among Western diplomats after Washington absurdly sanctioned Zarif…and then asked for talks. The safe passage of diplomats is an ancient, universal practice — without it, how can peace ever be arranged?

But America does not make the laws for the entire world, try though they might. Stressing this point was perhaps the key motivation behind Macron’s hosting of Zarif. Macron would soon overstep his bounds, however.

I had little desire to see Biarritz in lovely and rebellious Basque Country and the very spot where California surfing first arrived to a stunned old continent in 1956 on total lockdown. Amnesty International decried Macron’s 13,000 cops who made sure their boss was not embarrassed by any pesky Yellow Vests. The continued and stunning violation of the human rights to freedom of assembly and free speech in France were dutifully relayed immediately by the Western Mainstream Media… for the far-right, nativist protests in Hong Kong, that is. This double-standard, and the false portrayal of the Yellow Vests as a right-wing movement, has gone on for nine months.

But when Zarif surprisingly landed at the usually boring G7 summit I certainly second-guessed my decision not to attend! Then what was even more newsworthy was Macron’s announcement that a meeting between the US and Iran could happen “within weeks,” even though one hasn’t happened for 40 years. And me in Paris!

Fortunately, my newsroom bosses were not chewing me out but rolling their eyes at Macron’s predictions. One expects Trump to seriously push wild ideas, but Macron? Yes, are the two inexperienced political outsiders and infamous egotists really that different?

It’s true that France has been preoccupied with Iran since Gulf War II, which removed their biggest ally and trading partner in the region — Saddam Hussein. France sees Iran as a potential ally in a Middle East where US and UK neo-imperialism holds far more sway.

Paris is also not stupid: they realize that Tehran is truly on the brink of pulling out of the JCPOA and not returning for years. (That’s the only “within weeks” which is realistic here.)

Macron is also motivated by the short-term concern of avoiding costly escalations: an economic shock would push France — the poster child of the little-reported economic Lost Decade in the Eurozone — into recession.

After the surprise notion that Trump and Rouhani would meet in Washington before autumn began wore off, it became clear that Macron was playing to his domestic audience; he was trying to project success amid his never-ending and ever-failing plans for more punishing austerity, the likelihood of an upcoming recession even without any Persian Gulf turmoil, and his unprecedented repression of the Yellow Vests. Talk is cheap, and Macron would have said anything at the G7 to make himself appear not domestically unsupported, economically incompetent and a puppet of foreign interests, all of which he certainly is (per the average French person).

Zarif and Iran immediately apprehended that his wild claim was classic French window-dressing intended for the West’s domestic audience only. “A meeting between Rouhani and Trump is unimaginable,” said Zarif. “What American and French officials say concerns themselves,” he said.

Being a guest at a G7 summit was nice, but Iran’s position remains unchanged and crystal clear; there can be no renegotiation of the painstaking and protracted negotiations which were the JCPOA, and also that Washington must lift sanctions (an act of war) before more talks can possibly occur.

US National Security Adviser John Bolton affirmed the obvious — the US has no intention of stopping its war, of lifting sanctions, of pursing peace… therefore neither side believes there can be negotiations “within weeks."

The only person who may be surprised by this outcome is Emmanuel Macron.

Iran will certainly wait years before even backing down just a bit, because they have already waited decades for acceptance of their ideals of 1979. But Iran doesn’t care about superficial appearances, like Macron does — Iranian civil servants operate in the real world of values, not the ether of stars and egos.

French media is still tipsy of the notion that Macron has “revived Gaullism” by returning to forgotten French independence from the US (only via glomming on to Iran’s genuine independence, of course).

Firstly, de Gaulle had infinitely more integrity (he reimbursed state coffers for the sweets his grandchildren ate) than Macron and his giant lobster-eating ministers, but the idea that de Gaulle was not a mad bomber (Algeria, Syria, Vietnam, etc.) of a neo-imperialist is promoted only among nostalgic French people.

Secondly, the rabidly pro-Brussels Macron can never be assumed to be doing something which puts the patriotic interests of the French people at the very top, whereas de Gaulle was a nationalist (which is not the same thing as a “patriot”).

French media viewed Macron’s Iran-related efforts as more proof of the inherent, never-ending superiority of French diplomacy. "It's unprecedented and given the context it's pretty audacious," said a French diplomatic source. Unlike France, Iran is not a country where audaciousness is foolishly viewed as a certain virtue.

The New York Times summed up the essential hollowness of Macron’s showy efforts amid a context of serious politics with the headline, “How Emmanuel Macron Positioned Himself as Star of the G7 Show."

To put a new spin on the old adage, “Beauty may enter, but only virtue may stay”; Personality may get elected, but only humble civil service can stay. Macron seems to believe that revealing, behind-the-scenes media access to the president and unflagging Broadway-style energy is going to impress the average French citizen more than positive economic results and respecting their opinion on public policies.

The irony was that the theme of this year’s G7 was “global inequality,” and yet that has always been the primary demand of the Yellow Vests — Macron stole their idea and repaid them with tear gas and prison sentences.

Despite the bold, economically-populist theme, “Early in the weekend Mr. Trump’s aides complained that the agenda that Mr. Macron set focused more on what they called “niche issues” like climate change than on global economic challenges.” Of course Macron was not about to discuss ending Quantitative Easing, ending central bank collusion among the G7 nations to provide free taxpayer money for corporate banks, or ending punishing austerity measures on the average person to pay for these 1%-geared policies. In modern fake-leftist and centrist fashion, Macron prefers to focus on class-neutered issues like ecology - the Brazilian wildfires were so well-timed to keep economic redistribution out of the discussion that they might have been set on purpose! Furthermore, many wondered why Macron encourages gold mining in the modern-day colony of French Guiana if he loves the rainforest so much?

For all his “Vote for me because I’m not a racist like Le Pen” duplicity, Macron has always been a hard-core French imperialist at heart, and he is here to lead the world’s non-Whites/non-Christians to civilization. “He said as much last week, telling journalists that the summit was a way to demonstrate that the ‘European civilization project’ was an ‘answer’ in a world searching for ‘global stability.’”

In the end Macron’s wonkish vigour and mastery (of only the neoliberal solutions to global instability) is all a way to push Western Liberal technocratism, and thus he is no different from the election campaign of Hillary Clinton. Technocratism views morality as relative, Western bourgeois individual freedoms over broad equality as a given, and the exceptional individual as having an atheistic/biological divine right to lead.