Zarif: US must return to JCPOA, end economic terrorism before seeking talks

TEHRAN, August 29 -Iran’s Foreign Minister Mohammad Javad Zarif says the US must return to a 2015 multilateral nuclear agreement and end its economic terrorism against the Islamic Republic as a prerequisite for negotiations. 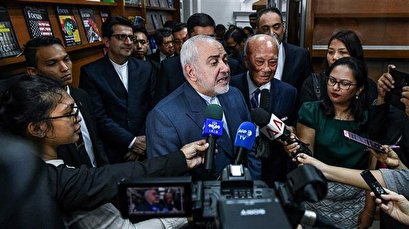 “So if they want to come back into the room there is a ticket that they need to purchase and that ticket is to observe the agreement,” he added.

Zarif also stressed that Iran does not want to meet for the sake of meeting, saying, “We need to meet if there is a result.”

He made the remarks days after French President Emmanuel Macron expressed hopes for a meeting between President Hassan Rouhani of Iran and his American counterpart, Donald Trump, “in the next few weeks.”

Rouhani, however, rejected any such talks under pressure, urging the US to lift all its “cruel” bans and begin respecting the nation’s rights as a “first step” towards dialog.

The nuclear deal — officially named the Joint Comprehensive Plan of Action (JCPOA) — was signed between Iran and six world states — namely the US, Germany, France, Britain, Russia and China. Washington, however, left the accord last May, leaving the future of the historic deal in limbo.

Critical of Washington’s move, the European parties to the JCPOA vowed efforts to keep the accord in place by protecting Tehran against the US sanctions, but did little in practice.

Tehran began reducing its commitments under the JCPOA on a stage-by-stage basis in response to the US’s withdrawal and the ensuing European failure to make up for America’s absence.

Elsewhere in his comments, Zarif vowed to “expedite” legal action against British-flagged Stena Impero tanker, which was seized on July 19 by Iranian forces for violating international maritime rules in the Strait of Hormuz.

“We will expedite the legal process for the British tanker that is now in our custody after they basically committed sea crimes by taking our ship,” he said.

The top diplomat further stressed that Iran would no longer be lenient about ships which refuse to respect international regulations in the Persian Gulf waters.

“We have been lenient about ships in the Persian Gulf. They break laws about communication, about sea lanes, about discharge of waste. Now there is no reason to be lenient with those who violate international laws,” Zarif said.

Zarif is in Malaysia on the last leg of his three-nation Asian tour, which has already taken him to China and Japan.

On Thursday morning, the Iranian foreign minister met with his Malaysian counterpart, Saifuddin Abdullah, in Kuala Lumpur, the third destination in his three-nation tour of Asia, which had earlier taken him to China and Japan.

The two top diplomats discussed a wide range of topics, including bilateral ties, problems facing Iranians residing in Malaysia, and latest developments regarding the JCPOA implementation, as well as regional, international and the Muslim world issues.

Zarif also addressed the Institute of Strategic and International Studies Malaysia and the Common Security in the Islamic World forum.