TEHRAN, August 29 - US National Security Advisor John Bolton accused China of “stealing” plans for the F-35 fighter, claiming the newest Chinese aircraft looks exactly the same. But if looks are to be judged, Beijing is, by far, not the only culprit. 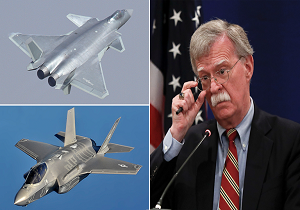 TEHRAN,Young Journalists Club(YJC) -“The fifth-generation Chinese fighter aircraft looks a lot like the F-35, that's because it is the F-35, they just stole it,” Bolton said during a press conference in Kiev on Wednesday.

He did not specify which Chinese aircraft he had in mind – but it would take a lot of squinting for anyone looking at the J-20, the only Chinese 5th-gen fighter in service, to say it looks like the F-35. It’s significantly larger, has two engines instead of one, features prominent nose canards, etc. Basically, the only thing the two have in common is that the machines are modern stealth fighter jets.

Bolton could have been showing a deeper knowledge of the Chinese aircraft industry and had the Shenyang FC-31 fighter in mind.

This one does look similar to the F-35. However, only a couple of prototypes have been built over the past decade, and they've barely ever been seen flying. According to media reports, the plane is riddled with technical issues – which suddenly makes the likeness to the American jet both more evident and more ironic.

For years, China has been the US’ prime target for accusations of technological espionage – including in regard to the F-35. Still, Bolton should probably look out for others plotting to ‘snatch’ the precious jet from America. A whole lot of recently unveiled plane prototypes are suspiciously similar to the machine – in looks, anyway, if that's what counts to the national advisor.

Many actually belong to Washington’s allies. The mockup of the British BAE Systems Tempest 6th-gen fighter – expected to be operational in the mid-2030s – looks exactly the same as an F-35.